“Arise, awake, and stop not till the goal is reached! O you Indians, discover yourselves, you are children of Immortality. There is no power on earth that can stop your onward march to greatness. You shall free the nation from British Imperialism and then make India the Guru, the Spiritual Teacher of Mankind. You now need tremendous self confidence. India had been in the past the Crowning Peak of Spirituality and Religion. I can clearly see that in future, India shall be even more glorious than she ever was even her glorious past. I call out to you young men – Arise, awake! Throw away all laziness and inertia. This does not become Young India Advance - go forward! March ahead, children of India!” 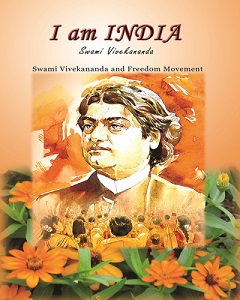 These are the firey words of Swami Vivekananda. Such firey words created an atmosphere of freedom in country. These fiery words shook the whole India.

Hem Chandra Ghosh, one of the foremost Indian revolutionary, freedom fighters, was interviewed by Swami Purnatmananda of Udbodhan, on March 26, 1978 which is now with us as I AM INDIA.

When asked about his first meeting with Swami Vivekananda this is what Hem Chandra said: “It was the 19th of March, 1901. Swami Vivekananda had just set foot in Dhaka. That was the first day I ever set eyes on him. It was my good fortune to have caught a glimpse of him the very moment when he arrived by train in Dhaka Railway Station.

In I AM INDIA we find “A surging crowd had gathered in the station to receive Swamiji. I was among the privileged few to form a cordon for him to step out of the station to get into the carriage. The entire elite of Dhaka were present at the station. Spontaneously, the vast crowd organised a massive procession. I still clearly picture that magnificent scene. There was wild excitement, the like of which had never been witnessed in Dhaka before. I remember a particular incident then. The mass of students who had gathered around Swamiji were raising the slogan Ramakrishna Paramahamsaji-ki-Jai”. Only once, the crowd shouted -”Swami Vivekananda-ki-Jai”.

Immediately, Swamiji strongly objected and shouted – “No! Stop! Don’t utter my name here. I am the humblest of the humble servants of Sri Ramakrishna Paramahamsa. If you must raise a slogan, then utter it only in His name!”

“The Vivekananda, who was a world conqueror at the time proved his devotion to his Guru in this magnificent gesture! Unforgettable indeed! We were all completely over-whelmed by this spirit.

“Myself and my fellow students daily went to meet Swamiji` in the house of Mohini Mohan Das at Farash Ganj in Dhaka city. Swamiji and his personal companion, Swami Sadananda, noticed our regular visits and they were both attracted towards us. I accompanied Swamiji wherever he went in and around Dhaka. I had the unique privilege of being in his company for full fourteen days. Swamiji delivered two lectures in English in the famous Jagannath College and Pagoj school. Both lectures were attended by thousands of people. I had the good fortune to hear both the speeches, so I was among the fortunate ones who heard his passionate and fiery orations directly - the same fire and magnificence that had completely charmed and captivated the intellectual elite of Europe and America. I admit that as a student I could not follow properly his speeches in English. But that didn’t matter, because I distinctly remember the fire, the powerful phrases, the enthusiasm, the magnificent voice that poured forth from Swamiji’s lips. As a revolutionary freedom fighter, I have had the privilege of hearing the speeches of many stalwarts of our freedom struggle in later days, but I can say this without fear of contradiction that not one of them could come any where near the oratory and power of Swami Vivekananda’s speeches.

“It seemed that when he spoke, Swamiji took the audience with him and moulded their whole being with his fire and spirit. Over that, his appearance was regal, masculine, powerful, victorious.The audience was totally electrified by his speech. He even seemed to mould the English language itself into a vehicle of the most sublime and powerful ideas. What a magnificent, organ-like musical and melodious voice he had! What brilliant flashing eyes! I wonder whether even the Gods – let alone human beings can have such a wonderful pair of eyes. It is nearly 80 years since I saw Swamiji last, but the flashing brilliance of those eyes of his still haunt me. His stentorian voice still rings in my ears. I have come into close contact with many great leaders of India but only a handful have left a lasting impression on me. Today, at the very sunset of my life I have discovered that it is Swamiji, and Swamiji alone, who has left an indelible imprint on my mind, heart and soul, and his spirit still throbs in my whole being”.