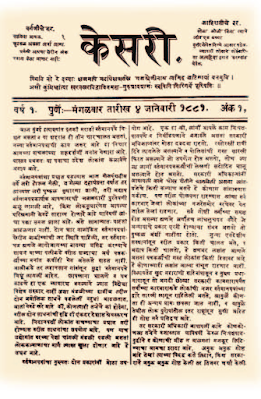 I am young in spirit. Even if my body has grown old, the young spirit inside me is still alive. Whatever I am saying today is deeply felt by this young spirit inside me. The body can wilt, it can decrepit or even perish but the soul residing in the body is forever young. Similarly, if our Home Rule activities slow down, the freedom of our inner spirit cannot sustain and no longer will it be indestructible. Then, we ourselves will start believing that we are slaves."
-Lokmanya Bal Gangadhar Tilak, in 1917, at Nasik.

Kesari (Marathi: केसरी Sanskrit for lion) is a Marathi newspaper which was founded on 4 January 1881 by Lokmanya Bal Gangadhar Tilak, a prominent leader of the Indian Independence movement. The newspaper was used as a spokes piece for the Indian national freedom movement, and continues to be published by the Kesari Maratha Trust and Tilak's descendants.

The following note appears to have been written in reply to the query from some inquisitive reader.

Karma Yoga, or to put it in another way, the Law of Duty, is the combination of all that is best in spiritual science, in actual action and in an unselfish meditative life. Compliance with this universal Law leads to the realisation of the most cherished ideals of Man. The Karma Yogin  strives for Swaraj, and the Dnyanin or spiritualist yearns for it. What is then this Swaraj? It is a life centred in Self and dependent upon self. The Rishis who laid down the Law of Duty, betook themselves to forests, because the people were already enjoying Swaraj or People's Dominion, which was administered and defended in the first instance by the Kshtriya kings. It is my conviction, it is my thesis, the Swaraj in the life to come can not be the reward of a people who have not enjoyed it in this world. Such was the doctrine taught by our forefathers who never intended that the goal of life should be meditation alone.
B.G. Tilak
The Mahratta, 12 August 1917
--