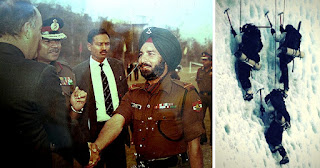 One of India's only three living winners of the Param Vir Chakra, Bana Singh was responsible for giving the Indian army a crucial edge in the Siachen Standoff of 1987.
"Siachen is indispensable for India and no price is too big for it." – Honorary Captain Bana Singh (retd).

High in the Karakoram lies the Siachen Glacier — the largest alpine glacier on earth that has nearly two trillion cubic feet of ice. The highest and coldest combat theater in the history of the world (where temperatures dip to minus 52 degrees Celsius), this landscape is also an unforgiving battleground where the armies of India and Pakistan have faced off for years.

The scroll of honour at Indian Army's Siachen base camp reads, "Quartered in snow, silent to remain. When the bugle calls, they shall rise and march again."
It was in these icy heights that Naib Subedar Bana Singh fought the battle of his life, forging a story of epic proportions. One of India's only three living winners of the Param Vir Chakra (the nation's highest military honour), Singh was responsible for giving the Indian army a crucial edge in the Siachen Standoff of 1987.
Here's the tale of this unforgettable mission, a story of duty, discipline and extraordinary valour.
In the 1970s, Pakistan had started giving permits to foreign mountaineers to climb around the Siachen glacier, with the intention of fostering the impression that the region was Pakistani territory. By the 1980s, it had become determined to entrench its claim.

It might have succeeded (in creating a formidable Pak-China corridor controlling the Karakoram Pass and threatening Ladakh) if the Indian intelligence had not learned of some interesting purchases made by Pakistani Army in London in 1984 — bulk orders of specialized mountain clothing.
Three years later, at a time when India was already busy dealing with the serious trouble brewing on her northern border in Tibet, a disgruntled Pakistan launched a major offensive to dislodge the Indians from their pickets near Siachen.

Through a stealthy intrusion, Pakistan succeeded in establishing a post — so important that it was named after its Quaid-e-Azam, Mohammad Ali Jinnah — near the Bilafond Pass on the Saltoro ridge. From there, the Pakistani troops now had a clear view of the glacier and India's defence posts. The post began monitoring helicopter movements, spewing artillery fire at India's supply lines and picking out Indian patrols.

In May 1987, a reconnaissance patrol under young Lieutenant Rajiv Pande was gunned down by the Pakistanis, killing nine soldiers and leaving only three survivors. Their bodies would be retrieved only several weeks later.

A month later, Major Varinder Singh of 8 JAK LI battalion was given the responsibility of leading a company of selected soldiers up a treacherous 1500 feet ice wall from Point Sonam (an Indian Army post at 19,600 feet surrounded by crevasses). 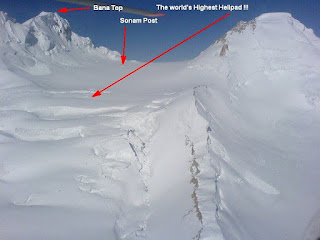 On June 23, the group started their precarious climb at 8 am but the weather conditions were so bad that they managed to cover barely 150 meters of the 90-degree gradient slope till 4 am next morning. The party was asked to return but the soldiers decided not to retreat. They knew that if they didn't get to that post, none of the men would be coming back.

With a few sips of tea, some chunks of chocolate and their indomitable courage strengthening their spirit, the group stayed on course to carry out the final assault.

Subedar Harnam Singh and his small party were the first ones sent for the lead attack but they were severely wounded in heavy firing from the Quaid Post. Next, Subedar Sansar Chand was sent with another small party but soon, contact had been lost with him.
It was then that Naib Subedar Bana Singh was handpicked by Major Varinder Singh (who had been shot in the chest earlier in the operation), along with two other soldiers, for the lead attack. However, when the health of the two soldiers deteriorated due to the extreme conditions, Singh stayed put in the open for a whole day till reinforcements came in the form of five soldiers.

"The group was exhausted but Pande had to be avenged, and the relentless firing from Quaid reminded us of what we had to do," Bana Singh later told Broadsword, a defence blog run by defence analyst Ajai Shukla.

As Singh's small party began scaling the near-vertical wall of ice under blinding snowfall, they came across the frozen bodies of nine comrades along the way. Never stopping and even more determined, they continued to clamber up steadily and stealthily to reach the enemy bunkers at the top.

Setting an example in high altitude warfare that would bring him the country's highest ranking gallantry award, Singh and his men then launched a brilliant attack to clear the post of every single infiltrator.
With utter disregard for their personal safety, Singh and his men charged through the fire zone, firing and lobbing grenades at the enemy. Using hand-to-hand combat, they also bayoneted the enemy soldiers outside the bunker.

Singh personally threw grenades into the bunker before closing the door, killing the six Pakistani soldiers holed up inside and clearing the post of all infiltrators. It was later found that the enemy soldiers belonged to Shaheen Company of Pakistan's elite Special Services Group.

Next, the victorious Indian soldiers turned the guns (that were aimed in the southern direction towards India) towards Pakistan in the north. They then used the Pakistani stove in the bunker to make some rice — the first meal they had in three days.

"We had no strength to celebrate. At 21,000 feet, nobody does the bhangra or yells war cries. Ultimately, sheer doggedness iwins. If we had once hesitated, Quaid would still be with Pakistan," Singh later told Broadsword.

Thanks to Singh and his gutsy team, by 5 o'clock on the evening of June 26, 1987, the Indian flag was flying high at the Quaid Post. In a fitting tribute to the heroic coup through which India had won back the post, it was later renamed Bana Top in Singh's honour, by which it is known till today.
For "conspicuous bravery and leadership under most adverse conditions", Bana Singh was awarded the Param Vir Chakra. He is the only soldier, along with the late Major Ramaswamy Parmeswaram, to be get this honour in peacetime (it is otherwise only given for exemplary military courage during war). Later, he was given the honorary rank of Captain.

A year after the end of Kargil War (during which he was the only PVC awardee still serving in the Army), Singh quietly retired after 32 years of exemplary service to the nation and returned home to Kadyal, the small village in Jammu where he was born. He now lives in a humble farm-fringed home while his son, Rajinder Singh, has followed in his illustrious footsteps to join the Indian Army.
Ref : https://www.thebetterindia.com/123693/bana-singh-indian-army-param-vir-chakra-hero-1987-siachen/
--
कथा : विवेकानन्द केन्द्र { Katha : Vivekananda Kendra }
Katha Blog : http://katha.vkendra.org
Katha Google Group : https://groups.google.com/forum/?hl=en#!forum/daily-katha
Vivekananda Rock Memorial & Vivekananda Kendra : http://www.vivekanandakendra.org
Read n Get Articles, Magazines, Books @ http://prakashan.vivekanandakendra.org
Let's work on "Swamiji's Vision - Eknathji's Mission"
Follow Vivekananda Kendra on   blog   twitter   g+   facebook   rss   delicious   youtube   Donate Online