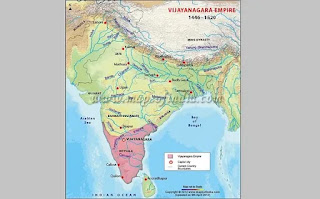 The Vijayanagara Empire was founded in 1336 by two brothers – Harihara I and Bukka Raya I – with the goal of protecting the southern parts of the Indian peninsula from frequent attacks and plunder emanating from the Islamic sultanates of the north. The two brothers formed the Sangama dynasty and managed to exert their dominance over most of the regions south of the Tungabhadra within two decades.

In the years after the inception, successive descendants of the brothers occupied the throne of Vijayanagara and grew the empire manifold. Deva Raya II, the ninth ruler of the Sangama line, was arguably the greatest of his lineage – consolidating the hold of the empire over Calicut and Kollam, Sri Lanka and Burma.

By the time Krishnadevaraya had ascended to the throne, the Vijayanagara Empire had dominated south India for almost two centuries, successfully defeating the Deccan sultanates numerous times and establishing Vijayanagara as the most prosperous kingdom in the Indian subcontinent.

Krishnadevaraya was born into the Tuluva dynasty – the third dynasty to rule over Vijayanagara – and was crowned king in the year 1509 on the auspicious day of Krishna Janmashtami.
Krishnadevaraya – The King of Three Kings

Krishnadevaraya's rule brought unprecedented success to the Vijayanagara armies – with the forces inflicting heavy defeats on the five Deccan sultanates, the Reddys of Kondavidu, the Velamas of Bhuvanagiri and the Gajapati dynasty of Kalinga (modern Odisha).

His victories helped establish him as the most powerful Indian ruler of the time, with his administrative capabilities and his military prowess acquiring legendary status. His repeated victories over the Deccan sultanates led to the poet Muku Timmana admiring him as "the destroyer of the Turks".

The Sultanate of Bijapur

The sultanate of Bijapur was founded by Yusuf Adil Shah when he broke away from the Bahmani Sultanate in 1490 and declared Bijapur an independent state. Yusuf Adil Shah ruled until 1510, following which his son, Ismail Adil Shah, took over the throne.

After having successfully quelled internal rebellions to his rule, Ismail Adil Shah went about building his dynasty and establishing himself as the most powerful of the Deccan sultanates. He achieved this through his crushing victory over the combined armies of the other four sultanates – Berar, Ahmednagar, Golconda and Bidar – when they laid siege on Bijapur.
After his defeat of the rival sultans, Ismail Adil Shah turned his attention towards Vijayanagara. In 1516 CE, sensing an opportunity when Krishnadevaraya was engaged elsewhere in battle with Kalinga, he attacked the Raichur fort and took over its control from Vijayanagara – sowing the seeds for the grand battle that followed.

The Battle of Raichur

Raichur, in Karnataka, is located between the two converging rivers of Krishna and Tungabhadra (doab) – causing its land to be extremely fertile and amenable to growing a variety of crops like cotton, chillies and sesame. This made it a significant asset for whichever kingdom that controlled it.

Key to taking the Raichur doab and the revenues that came with it was control over the Raichur fort – a city over which there had been much conflict between the Deccan sultanates and Vijayanagara in the past. Krishnadevaraya had taken control over it during his early campaigns but, as mentioned earlier, Ismail Adil Shah managed to wrest it away when Krishnadevaraya was engaged in his battles with Kalinga.

The war with Kalinga concluded in 1516, with the Kalinga king Prataparudra surrendering before the might of the Vijayanagara armies. With the threat from Kalinga having been subdued, Krishnadevaraya turned his focus back to his primary enemies – the Deccan sultanates.

The major trigger for the war to begin is also said to have been the dishonesty of a merchant named Syed Maraikar, whom Raya had entrusted with 40,000 gold coins to procure horses from the Portuguese at Goa. Maraikar fled with the coins to Bijapur and sought protection from Adil Shah, who gave it, spurning requests from Vijayanagara to hand the culprit back.

The refusal of Adil Shah to cooperate is said to have forced Raya's resolve and catalysed his decision to launch the Raichur campaign. In early 1520, the Vijayanagara armies – led by Krishnadevaraya – set course for Raichur.

Much of what is known about the battle is from the accounts of Fernao Nunes, a Portuguese traveller and chronicler, who accompanied the army to Raichur and was an eyewitness to what followed.

According to Nunes, the Vijayanagara army assembled by Raya was of a massive scale – a 760,000 strong force including 32,600 horses, 550 elephants and 14 contingents of fully armed soldiers. Krishnadevaraya's legendary commander Pemmasani Ramalinga Nayaka was also part of the forces. The party was also said to include water carriers, courtesans and cooks numbering into the thousands. In addition, Raya had also deployed 50,000 scouts who would ride ahead of the army and send back reports about the enemy to the base camp. 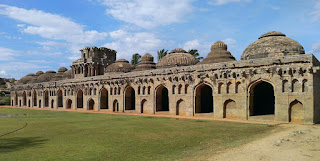 The engagement began with the forces of Vijayanagara surrounding the Raichur fort and commencing their siege from the eastern side – where the fort was said to have been its weakest. The siege continued for three months, with the Raichur fort's garrison – armed with 200 heavy cannons and several smaller ones – giving a tough fight to the Vijayanagara forces under Ramalinga Nayaka.

The battle took a different turn in May 1520 CE, when Ismail Adil Shah's army arrived at Raichur and set up camp on the farther side of the Krishna River (around 25km from the Vijayanagara army). The Bijapur army was of a lesser number than Vijayanagara, but Adil Shah had put his faith in his 900-strong artillery, which he felt would be decisive in the battle ahead.

Adil Shah's initial plan was to entice Raya to try to cross the Krishna River and engage – allowing his artillery to destroy the Vijayanagara forces while they were busy crossing the waters. But Raya – perhaps warned by his scouts – chose not to take the bait and waited patiently for Adil Shah's next move.

Finally, recognising that the Vijayanagara siege would be successful at some point if he didn't engage, Adil Shah crossed the Krishna River but still set up camp close to the waters in order to assure good water supply to his camp.

The armies collided on 20 May 1520 CE, with Krishnadevaraya announcing his intent with the beating of war drums at the crack of dawn. The scale of the sound – including military orders and the cry of the beasts accompanying the army – emanating from the camp was described by Nunes as "It seemed as if the sky should fall to the earth (because of the noise)" and "if you asked anything you could not hear yourself speak and you had to ask by signs".

Raya divided his army into seven wings and, initially, only ordered the first two – led by his father-in-law Kumara Virayya – to attack. Raya himself was to take command of the remaining five.

Adil Shah – who, in stark contrast to Raya, had decided to stay behind his army and take no part in battle – wanted Raya and the bulk of his forces to engage as early as possible. The reason for it was that he wanted the maximum concentration of the Vijayanagara army in the firing range of his artillery in order to inflict all-out damage and, if luck would have it, slay the king as well.

Raya's decision to send just two wings confounded him again, and soon Kumara Virayya's spirited assault cut through the Bijapur forces and pushed them back into their trenches.

Adil Shah was now in a conundrum. The long time it would take to reload artillery during those days meant that he had to fire his cannons at a carefully calibrated time in order to ensure maximum damage and give his men enough time to reload.

Sensing an imminent victory, the Bijapur forces attacked with full flourish, pursuing the retreating soldiers and slaughtering them as they fled away.

Krishnadevaraya responded almost immediately – charging onto the battlefield with the remaining five divisions. Raya's entry swung the battle decisively – the Bijapur soldiers had broken formation while charging forward and were disorganised. The avalanche of Raya's five divisions decimated them and swept them into the Krishna River.

Raya's onslaught was so fierce that the fleeing Bijapur soldiers abandoned their camp completely and ran into the river to save their lives, as the Vijayanagara army chased them and wreaked havoc. A desperate but brave attempt by the Bijapur commander Salabat Khan to attack Raya directly was also subdued and Khan was taken prisoner.

In the meantime, Adil Shah, helped by his bodyguard Asad Khan, fled the camp on an elephant, leaving Krishnadevaraya to occupy the sultanate's camp as well.

With the army of the sultanate destroyed, Raya turned his attention back to the fort and continued the siege. The second assault was further aided by the arrival of the Portuguese captain, Christovao de Figueiredo, along with a troop of 20 musketeers, to deliver horses to Raya.

The Portuguese musketeers were deployed to attack the defenders of the fort, who were shot down one by one, ending with the death of the governor of the fort, after which the Raichur fort soon surrendered to Krishnadevaraya and the Vijayanagara army.

The crushing victory over the Bijapur sultanate took the power of the Vijayanagara Kingdom to its zenith with none of the sultanates daring to risk another attack during Krishnadevaraya's lifetime. Very soon, Raya and his armies marched into Bijapur and raised its former capital, Gulburga, to the ground.

These successive victories established Krishnadevaraya as the leading monarch of the Indian subcontinent – so much so that the tales of his valour are said to have removed any notions of attacking south India from the mind of Babur after his victory over Ibrahim Lodhi.

However, the achievements of Raya go even beyond the military field.

Fluent in many languages, he supported Sanskrit, Tamil, Kannada and Telugu literature. Several Kannada poets like Chatu Vittalanatha and Mallanarya enjoyed his patronage. The Tamil poet Haridasa is also said to have enjoyed Raya's benefaction.

Another member of the Astadiggajalu was Tenali Raman – a poet of great intelligence and wit, who has been represented lovingly across the country in numerous books, comics, TV serials and films.

An ardent devotee of the Tirumala Venkateswara temple, he is said to have offered numerous priceless items to the temple and is honoured in the premises with his statue even to this day.

No mention of Krishnadevaraya can be complete without that of the empire he led as its king. The Vijayanagara Kingdom, though scarcely mentioned in our textbooks today, was one of the greatest of the Indian subcontinent for over 200 years – keeping the fire alive for Dharmic values while the north was ravaged by repeated Islamic attacks.

During a time when the history of other parts of India was characterised by jauhars, mass genocides and temple destructions, Vijayanagara gave birth to great literature in multiple languages, rousing intellectual religious debates and classical music. Successive rulers of the empire also patronised the sciences, with the Kerala School of Astronomy and Mathematics performing leading research in trigonometry, calculus and astronomy. Nilakantha Somayaji, one of the earliest to have hypothesised on the orbitals of planets, was part of this very school.