THE REPORT GIVEN BY SHRI EKNATH RANADE, THE ORGANISING SECRETARY OF THE COMMITTEE on 2 Sep 1970

THE REPORT GIVEN BY SHRI EKNATH RANADE, THE ORGANISING SECRETARY OF THE COMMITTEE on 2 Sep 1970

Today is, indeed, a great day. A part of the dream is realized. The Shikharam or the domes of the Vivekananda Mandapam that you see today, we used to see when the Rock was bare and was devoid of any structures on it. But those towering Shikharams were merely ideas- lofty ideas- which some people considered as nothing but fancies. Those very fancies have today taken a concrete shape-rather a granite shape.

This memorial to Swami Vivekananda is not just one more addition to the existing memorials raised in his memory in the country. In the Kanyakumari township itself, there are already two memorials dedicated to his memory-one of those is just standing before us in this very ground – a small elegant shrine of Swamiji. Another is a library, by name Swami Vivekananda library, dedicated to his memory, on the Sanniddhi Street. What was then the necessity or propriety of putting up a third memorial just three furlongs away? It is necessary, I feel, to grasp the special significance of this memorial and its uniqueness.

This Rock is associated with the Swamiji's Life almost in the same manner as the Bodhi tree in Gaya is associated with the life of Gautam Buddha. It was just an ordinary tree as any other tree. But, on account of the fact that Gautam Buddha, meditating under this tree, received divine illumination, the tree and the entire surroundings have become a place of pilgrimage and a source of inspiration to millions of people all over the world. 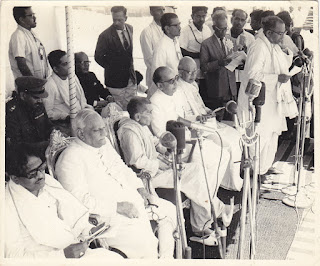 Similarly, this Rock which now bears the name of Swami Vivekananda, has a special significance in his life.

As his biographers tell us, the Swamiji had been only a simple wandering monk till he sojourned on this Rock to do mediation and Sadhana in search of an answer to numerous queries in his mind. It was here that he, in his deep meditation, got a vision, urging him to go abroad to give India's message of Universal Religion to the world as also to work for the regeneration and rebuilding of India so that she might become a fit and effective instrument to play the role ordained for her by the Divine. That vision transformed him into a great reformer, a master organizer and a mighty world teacher. It is to commemorate this event in the Swamiji's Life that this edifice has been built inspite of the hazards of construction at that difficult spot and the high cost it involved.

The Committee did not mind the high cost because the Committee knew that this monument would be a tremendous source of inspiration for generations to come. And again, the lakhs of rupees spent in this project have gone in whose pockets? They have gone to the poor stone-cutters, stone – chisellers, stone- dressers, fishermen who transported stones through the sea, the wonderful artists and artisans of Tamil Nadu whose deft hands carve living Gods and Goddesses out of dead stones, but who feel completely neglected in the present economic set – up.

And from whom the money has come? Believe me when I say that the bulk of the money has come from the common mass of people – from peasants, labourers, students, mine – workers, office – goers, constables, Jawans and factory workers.

And who collected the money? The money was collected not by big men of authority but by thousands of Alsinga Perumals all over the country. They went from house to house, school to school, office to office, factory to factory, and more than 25 lakhs of people, i.e. more than one percent of the adult population of this country were approached who willingly donated at least one rupee each, towards this cause.

The people forgot their party labels, rose above group or regional loyalties, caste or communal affinities or other narrow considerations and joined in this national endeavor.

The money has come from all the States in the country and from all levels of the society.

The state Governments also made their offerings in this great Yagnya. The Committee had appealed to each of the State Government to make a befitting symbolic donation of Rs. 1 lakh minimum, towards this cause. The following are the state-wise public and Government donations to the Committee.


The Tamil Nadu Government have made a significant donation towards this project, not in cash but in kind. They undertook to bear the cost of building Jetty – platforms, one at the Rock and the other at the shore. They have already spent, uptill, now, more than Rs.3 lakhs for the undertaking, and may have to spent at least another lakh of rupees to make the jetties fully useful in all sea-conditions and weathers.

From the list read out before you it might be noticed that some Governments have donated less than the desired measure of Rs. 1 lakh. But this, I can assure you, is only due to procedural delay and does not at all mean that they have no mind to respond in full measure. We have received this morning a telegraphic Communication from the Orissa State Government that they were soon sending the balance amount of Rs. 82,500.00 to make their State donation reach Rs. 1 lakh.

A word about the budget might be necessary. When construction work of the memorial, was actually undertaken towards the end of 1964, the budget estimated was Rs. 25 lakhs. It subsequently went on increasing till it finally became Rs. 1 crore and 20 lakhs. The reason for this is that items of construction, which were under contemplation form the very beginning but were kept outside the budget, were included in it as the fund – prospects became brighter and brighter.

The story of this project has been very interesting. We started this 1 crore 20 lakh project which was then only Rs.25 lakh project, with only a few thousand rupees in the Committee's coffers. We had full faith that the money will come as we proceed ahead. The money came as we progressed and in the proportion, we needed it. It never happened that the project suffered from want of funds. Just two days back our Madras office conveyed to us here that the Committee had only a slender balance of Rs. 1 lakh. But the next day i.e. day before yesterday, we received a communication from the Education Ministry of the Central Government that they were sending us Rs.10 lakhs, for the time being, out of Rs.15 lakhs we had requested them to donate, on behalf of the Union Government, towards its present undertaking.

Including these 10 lakhs of the Central Government, the Committee's collections would exceed Rs.1 crore, the total expenditure till today being Rs.91 lakhs.

It is obvious that the grand conception of this memorial could not have taken this magnificent shape but for the superb skill and ability of our Chief Architect and Engineer, Sthapati Shri S.K. Achari.

Similarly, this wonderful Mandapam could not have been a real "Vivekananda Mandapam" but for the great sculptural skill displayed by the sculptor Sri N L Sonavadekar, would be shortly honoured by our revered Rashtrapati himself.

I said in the beginning that a part of the dream is realized. What is the further aspiration of the Committee? It is to found a Service Organisation or a Mission on the lines of the great Ramakrishna Mission, but to be manned and run by non-sanyasi missionaries pledged to life-long service and, as a corollary to it, to establish a Centre at Kanyakumari to train as All India cadre of dedicated workers, both men and women, for being deployed especially to backward areas of the country for the social and spiritual well – being of the people. We would need at least Rs.2 crores to begin with, to put the Mission on solid foundations. But more than money, we shall require talented and devoted men. I am sure, we shall get both.

In the end, let me be allowed to express one great pang in our mind, How we wish the Late Pt. Jawaharlal Nahru, the Late Lalbahadur Shastri, the Late C.N. Annadurai, the Late Mannathu Padmanabhan, the founder Vice President of the committee, who had keen interest in the success of this project, were living and physically present here to shower their blessings on us on this occasion. But we are sure, they are watching us from their heavenly abode and showering their blessings on us.