THE TRAGIC FACE OF INDIA

Swami Vivekananda's meditations on the Kanyakumari Rock found explosive expression immediately after in the message of dynamic spirituality which he delivered in America, England, and India during the remaining ten years of his life, a message comprehensive of man's total welfare, material as well as spiritual. 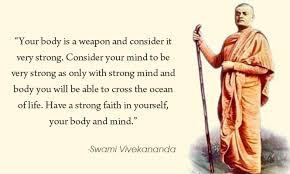 Swami Vivekananda was inspired by the great truth discovered by the ancient sages of India and conveyed to humanity at large by that immortal literature of our Philosophical and spiritual tradition, namely, the Upanishads, that the true glory of man lies in his inalienable, divine, immortal Self, the Atman. He had seen in his Master, Sri Ramakrishna, the full manifestation of this human glory; he has verified this truth of man in his own life as well. But when, after the passing away of his Master in 1886, he went round his country as a parivrajaka or wandering monk, and lived with its princes and peasants, its brahmins and untouchables, its poor and rich, in intimate communion with his people, he was deeply grieved to see the tragic face of the real India, the millions of battered, bruised and broken men and women of his country. Evidently, that glory of the human spirit proclaimed by his nation's books and saints had not passed on to the nation's multitudes. They bore the mark of arrested growth due to continued neglect, and also oppression, first, by invaders coming from without and, later, by invaders and oppressors bred within the country. This had made India a creature of history instead of being its creator, as she was for long ages. Other nations created history, and India became its victim century after century. This was the price India was forced to pay, said Swami Vivekananda, for her continued neglect and oppression of her common people. And he summoned modern India to reverse this trend and give back to the people their lost individuality and restore them to their human dignity and glory. He proclaimed this to be the central theme of the modern Indian awakening, the central purpose of his Practical Vedanta. Said he about the Indian masses in one of his letters:

"Trodden under the foot of the Hindu, Mussalman, or Christian, they have come to think that they are born to be trodden under the foot of everybody who has money enough in his pocket. They are to be given back their individuality. They are to be educated….. our duty is to put the chemicals together, the crystallization will come through God's laws. Let us put ideas into their heads. Now this means educating masses."