THE SPEECH DELIVERED BY THIRU M. KARUNANIDHI THE CHIEF MISISTER OF TAMIL NADU ON THE OCCASION OF THE INAUGURATION – CELEBRATIONS OF VIVEKANANDA ROCK MEMORIAL, KANYAKUMARI ON 02.09.1970 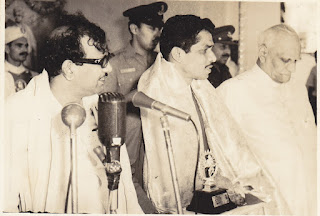 Revered President of India, Swami Vireswarananda, Thiru Eknath Ranade, Members of the Committee, Sisters and Brothers, It is my proud privilege to preside over this moment's inauguration of the Vivekananda Rock Memorial to-day. Kanyakumari is a place of great antiquity. Tholkappiam, our ancient Tamil Grammar, refers to "Thenkumari" as the Southernmost boundary of Tamil Nadu.

Washed by the three seas, stands this majestic rock where Swami Vivekananda got enlightenment before he passed to the world, his message of light and learning.  Swami Vivekananda's historic visit to the Parliament of Religions at Chicago was an epoch-making-one, in the history of the world.

It was the good fortune of Tamil Nadu and this place 'Kanyakumari', to have played a notable part in Vivekananda, making up his mind to attend this important world meet, where he conquered the minds of men.   The name, 'Vivekananda', means, one who can distinguish the right from the wrong. He was a noble sage who had universal vision, which ennobled everyone who came into contact with him, or with his teachings.

When this quite unknown young man of 30 appeared at the inaugural meeting of the parliament of Religions at Chicago in September, 1893, his strength and beauty, his grace and the dignity of his bearing, the dark light of his eyes, his commanding personality and the splendid music of his rich voice took the audience by storm.  Wherever he went he was the first. Though he is not with us to-day, the flame he lit, is still alight and from his teachings have sprung the conscience of India, its faith in her unity, and in his great message, Mankind finds solace and confidence.  The Memorial that stands here to-day will be a sentinel guarding not only for our frontiers but also our culture and tradition. 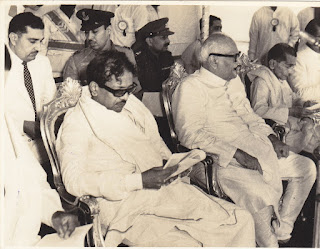 The entire structure, I learn, has been designed by Thiru S.K. Achari of Devakottai and I am really happy to see his artisanship.  Tamil Nadu is proud that when Vivekananda went to Chicago, Tamil Nadu stood at his command, under the leadership of our noble Sethupathi, and to-day, I see before me, as if the whole civilised world has assembled at the southern most tip of the Tamil Nadu to pay homage to Vivekananda.
Swami Vivekananda always had before him the great motto of "elevation of the masses". Many of his speeches were full of sympathy for the poor, the fallen and the down-trodden. His messages were always gospels of salvation, social elevation and equality for everyone.

I am very happy to inform, in this historic occasion, that the Tamil Nadu Government is deeply wedded to the thoughts and gospels for which Swami Vivekananda stood for. As we all know PREARINGAR ANNA clearly outlined in his life and works, that the salvation of humanity lies only in the salvation of the poor and the down-trodden. We see God in the smile of the poor and this Government has taken as its duty to make the poor smile.
Vivekananda's vision was "All-embracing" and his outlook "Universal". I would advocate very much at this hour, that class and caste feelings should be abolished from all of our hearts, and a United India thus created, where everyone feels equal in every respect, will be the rightful-tribute, India could pay to the greatest of her son.  Let me also greet all Sisters and Brothers present here from various parts of India and abroad.

Tamil Nadu has always been a great meeting place of minds. I can take pride to-day, when I see before me here, a new generation emerging at Kanyakumari.  It is very fitting, that the President of India, who is the embodiment of our rich culture, is here to inaugurate this inter-national memorial, since Vivekananda belongs to the entire human race.

Let us arise, awake and stop not, till our goal is reached.