The New Message of Kanyakumari

THE NEW MESSAGE OF KANYAKUMARI

For centuries we have prayed and meditated and undergone various austerities; we have achieved thereby a proficiency and greatness in that discipline of the inner life and built up a vast national reservoir of spiritual energy. Swami Vivekananda realised during his meditations on this Kanyakumari Rock that today's problems of our nation call for a dedication of these great energies of our culture to the urgent work of the social, economic, cultural and all-round betterment of the millions of our people. That calls for the expression of the national spiritual energies in the field of work, of efficient, co-operative work. And the message which Kanyakumari coveys to us today, therefore, is meditation combined with action, resulting in the evolution of a perfect national character, and synthesizing our age old moral and spiritual efficiency with modern scientific and technical efficiency.

It is this new emphasis on work, on intelligent, co-operative, team work, for the betterment of the lives of millions and millions of human beings, that is symbolized in this Kanyakumari. For it was here that Swami Vivekananda discovered that, in spite  of the high spiritual dimensions of our great culture, in spite of our producing some of the most outstanding spiritual geniuses of the world, our culture had neglected our common men and women as a result of our neglect of the material and socio-political aspects of human life, a neglect which became cruel in recent centuries. Today we need to emphasize this aspect of human life, and uphold the philosophy relevant to it, namely, intelligent, co-operative work. Poverty and social backwardness cannot be removed by ritualism, much less by religious magic, by rituals and ceremonies taken as the be-all and end-all of religion; their efficacy has to be proved by their fruits of purity of character and work-efficiency, behind which lies a deep  concern for man, for the divine in the heart of man. This is the call of Kanyakumari to all our religions.

Kanyakumari today proclaims the close spiritual kinship of such action with meditation. It proclaims the technique by which vision can flow into action, by which love of God can flow into the love and service of man. In Kanyakumari, India's spiritual quest, which mostly found its channel of expression in the tapas of inwardness, of meditation, through the inspiration of the Himalayas, now finds a new channel of outward expression in dedicated action. That is the inspiration that Swami Vivekananda received from Kanyakumari during the intense hours he spent here towards the end of 1892. He discovered his life's mission on this Rock.

The ancient sacred temple to the Divine Mother in this very Kanyakumari proclaims this truth; for here, the Divine Mother is worshipped as a Kanyakumari, Youthful maiden, engaged in tapas. And She represents the very spirit of India, ever-aging but never old, ever youthful in vitality and beauty and charm. 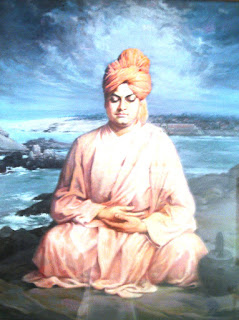 Vivekananda was deeply impressed by the enormous spiritual energies that India had accumulated by her long record of tapas. And his mission was to cut a perennial outlet channel of social action from this reservoir, keeping at the same time its inlet channel of inward meditation flowing clean and steady. The waters of such social action alone can provide the root nourishment to the human personality, with its economic, political, intellectual, and moral dimensions getting nourished as a by-product, just as a tree gets fundamentally nourished by the watering of its roots but not by the watering of its leaves and twigs and trunk. Says Vivekananda in one of his great utterances voicing man's awakening to his inborn divine nature: