Worldliness versus life in the world

In the simple, humble duties and joys of life, man can cultivate and manifest the divine that is within him, making for compassion, making for social concern, making for love and service. This is the type of practical spirituality which has to became the character-strength of every citizen in our country. Too long have we made a distinction between life in the world and life of religion. And we have been widening that gulf century, inspite of the clear and definite teaching of the Gita. Ramakrishna and Vivekananda came to bridge this gulf between life and religion. In the words of Ramakrishna, wherein the essence of the philosophy of Vedanta, the message of the Gita is given in a brief utterance: 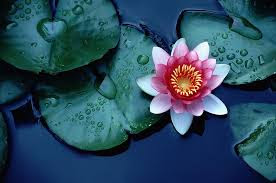 "Live in the world; but don't allow worldliness to enter into you."

Worldliness should not be allowed to enter our hearts; if it enters, life will become heavy with selfishness and pettiness, jealousy and exploitation, making for stagnation. But with the stirring of the ever-present divinity in the heart, life flows out in a spirit of lover and service, making for dynamism and progress. So Ramakrishna adds, by way of an illustration:

"The boat will be on water but water should not be in the boat. That is the wrong place for the water and bad for the boat. For, the boat will become stagnant and unfit for the purpose for which it is meant."

So when worldliness enters the human hearts, it makes for the stagnation of samsara, the stagnation of the little self of "I" and "mine", resulting in exploitation, social tension and violence; human life then becomes, in the words of Hobbes, "short, nasty, and brutish". That is what happened to us during the last few centuries. Inspite of our piety, inspite of our religiosity, which were become-essentially worldly, we were mainly selfish and self-centered. We practiced that may be termed a piety-fringed worldliness, which could not generate ethical sense, human concern, or character – efficiency. We exploited each other and reduced our collective life to elementary levels. Vivekananda rescued us form that false idea of religion as static piety and inspired us with his message of religion as dynamic spirituality, with its twin expressions of renunciation and service.

And Kanyakumari represents this great message of dynamic spirituality, the fruit of Practical Vedanta, whereby Eternal India's energy of spiritual vision becomes channelized into socially creative ends and purposes, endowing the nation with the resources of an ever-increasing spirituality 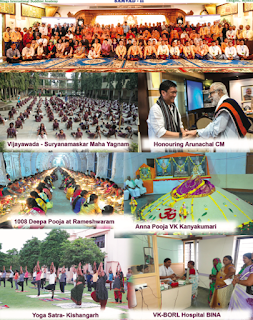 , side by side with the other type of strength and resource, namely, physical energy resources, which are being increasingly generated and utilized by our five-year plans of consumption of this latter energy is the accepted criterion to assess the development of a country. According to this criterion, India today is far behind, tenth or twelfth among the nations, with America leading, followed by U.S.S.R., up, with the steady implementation of her development programmes. Very soon we shall be developing a national electrical grid, connecting every region of our vast country with every other region, and helping to hasten the pace of our industrial growth and brighten the environment of the life of our people. 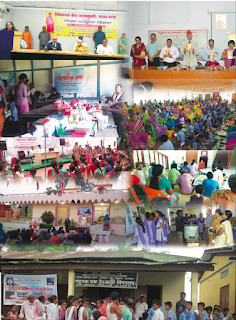 But this alone will not make for human fulfilment. The criterion of per capita production and consumption of Physical energy with respect to national development is a necessary but not a sufficient criterion. Humanity today in several nations which have fulfilled this criterion and are classed as highly developed, is not experiencing the expected sense of fulfilment. Vivekananda had therefore proposed more than seventy years ago, after a penetrating study of the philosophy of man behind modern Western civilization, a second criterion of human development, not opposed but complementary to that first criterion, namely, the per capita production and consumption of spiritual energy. He wanted India to retain her historically acquired hold on the science and technical know-how of this unique energy generation and consumption and to share it with the rest of humanity, while learning from the advanced nations the know-how of the physical science of man, with a view to enriching man externally and internally, materially and spiritually.