SPEECH OF THE PRESIDENT SHRI V.V.GIRI - 1

SPEECH OF THE PRESIDENT SHRI V.V.GIRI ON THE OCCASION OF THE INAUGURATION OF THE VIVEKANANDA ROCK MEMORIAL AT KANYAKUMARI ON SEPTEMBER 2, 1970 - 1 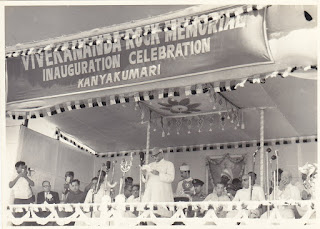 I am extremely grateful to the members of the Vivekananda Rock Memorial Committee for affording me this unique opportunity to be here today to inaugurate this Memorial in honour of Swami Vivekananda I deem it proud privilege to participate in this function as I claim in all humility that I have made my humble contribution by launching mass collection drives at Mysore, Delhi, Lucknow – to mention some. The construction of the Memorial at this historic spot is significant, for it was here that Swami Vivekananda derived inspiration and found answer to the problems tormenting his mind. It was after this, he undertook the historic journey to the United States of America to participate in the Parliament of Religions at Chicago.

While the function that you have organised today and the Memorial that you have erected here no doubt symbolise our keen and fervent desire to pay our tribute to one of the greatest sons of India, what is more important is that we should follow in our own lives, even if it is in a limited measure, what he had taught us. Otherwise, I am afraid all that we do will be a mere mockery and these monuments will remain nothing more than stone structures. We claim that ours is the land that has produced great savants and seers whose message transcended all barriers. We proudly feel that ours is the land that has produced Buddha, Shankara, Vivekananda and Gandhi. We sing their minstrels to the skies. We interpret and analyse their message of wisdom and knowledge, but if we fail to follow the true implications of this knowledge, if we do not live up to their teachings, we will but be poor inheritors of that great legacy. It is therefore of urgent necessity and a primary duty that we should search our hearts to see how truly we follow the tenets of these great seers and saints. What is required is a sincere determination that will translate 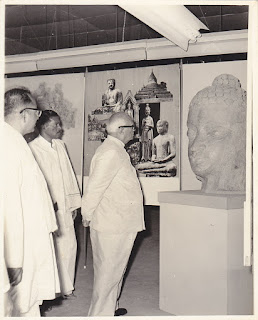 the ideals that they have placed before us into practice. More lip-sympathy to noble values will not take us far. They have to be matched by action – positive and concrete action. Unless and until we learn to practice what we preach and preach what we practice, we cannot claim to be true followers of the great legacy about which we often talk. If great personages succeeded in whatever they attempted it was solely because there was no dichotomy or divorce between what they said and did. A nation is known to be great not only by the contribution of a handful of leaders, but also the masses of people and if our country is to occupy its rightful place and claim itself to be civilised, every individual has to perform his duty.

Swami Vivekananda's contribution was not only limited to a religious revival or a cultural renaissance in our country, but more in bringing about a salutary change in the attitude and approach of the people. In this, he was next only to Shankara and combined in himself the many dimensions of a philosopher, saint, patriot, thinker and reformer.

His approach to problems was not based on any dogma or superstation but firmly rested on rational outlook. No wonder his approach finds a greater acceptance than many others not only in India but even among those who do not practice Hinduism. His remarkable and noteworthy work of social emancipation of the downtrodden and the awakening of national consciousness among the missions inhabiting this vast subcontinent will ever stand out strikingly as the supreme testimony of a versatile master-mind at work. He was not a mere idle philosopher who speculated on the "beyond" or a saint who stressed on the negation of work and contemplation of the spirit but one who was deeply involved with the hopes and aspirations of the people. He ceaselessly endeavored to give a practical orientation to religion and made the ordinary man understand the meaning and relevance of religion. The message of Swami Vivekananda can be summed up in one single sentence: "Be a man". As he said, his religion was man – making. According to Vivekananda, "Atman" was not beyond definition or understanding but was a tangible manifestation of courage and valour and he said "Brahman" was fearlessness.