VIVEKANANDA'S SUMMON TO OUR INTELLIGENTSIA

The masses must be roused, made aware of their own human dignity, their own divine heritage. This is the work he had set before our people today. He summons the intelligentsia of our country, our young educated citizens, to realize their alignment with the common people of their nation. Too long have our intelligentsia been aligned with the small upper strata of the society, the wealthy and the holders of power, ever yearning to catch a glance from them and get a crumb of their wealth and power. By so doing, our intelligentsia reduced itself to being the tail-end of an unjust social order, static and uncreative, and reduced itself also to a spiritually bankrupt and socially ineffective group. Certainly, human intelligence must have a higher role to play; certainly, it can function creatively to carry human evolution forward. Vivekananda invites them today to play this new role in their nation, the role of creative agents of social change, dynamic agents of free India to diffuse the blessings of that freedom among the nation's millions, so that Indian society may progressively bear the impress of the Upanishadic vision of human glory and dignity. That calls for the Union and State services, or in other fields of a dynamic character-efficiency which is the product of intelligence yoked to patriotic and service. They need to respond to the following truth uttered by Vivekananda: 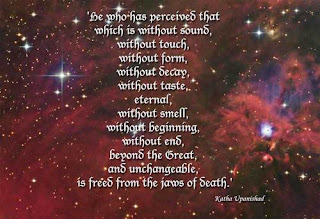 "Renunciation and service are the twin ideals of India; intensify her in those channels, the rest will take care of itself."

It is the renunciation of the lower, trivial self and the manifestation of the higher self whose spontaneous channel of expression is the higher self whose spontaneous channel of expression is the mood and act of service. Such renunciation and service from a new form of tapas or austerity, constructive and creative, yielding the twin fruits of spiritual growth of the person who serves and the all-round growth of the nation served. "Be and Make" is the motto that Swamiji has therefore given us: Be men yourselves and stand on your feet and make men of others by helping them also to stand on their feet. It is only through this human transformation, said Vivekananda, that we shall be able to forge a healthy body-politic for the ever-healthy, eternal, soul of our mother India. And India means a sixth of the human race. Its health is as much an international as a national concern in this post-war age. But our own national responsibility is primary.

THE PROMISE OF THE PRESENT TO THE FUTURE

Swamiji reminded us again and again that the soul of India is strong and pure. That is the Eternal India. It has inspired the nations of the world again and again. In every contemporary period of world history, nations out-side, civilizations outside, have always sought to come in touch with its eternal soul, to learn from its ancient wisdom. But, during the past few centuries, there has been a spiritual malnutrition in our body-politic; it had consequently suffered from many social ailments, which had made it weak and largely ineffective, both within the nation and without. It had lost its own former greatness and glory. Today we need to build a new body for that eternal soul of our nation. When these two become conjoined together, the healthy and eternal soul finding its vehicle in a healthy and dynamic body-politic, we shall see a resurgence of India, before which all her past resurgences will pale into secondary achievements. 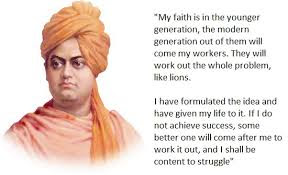 This is the promise of the present to the future, according to Swami Vivekananda. A part of the promise has been realised by our achievement of political independence in 1947 and the resulting freedom to shape our own destiny. We then gave ourselves a constitution which, for the first time in our long history, is based upon the people of India. All our previous political states derived strength from Emperors, kings, or military conquerors. The people had played no part and found no place in them. For the first time in the five thousand years of our history, we have been able to evolve a political state which derives its strength and sanction from "We, the people of India". Our constitution embodies the vision of human dignity and glory upheld in our ancient spiritual and philosophical tradition and in the modern socio-political humanistic heritage, and breathes the will to translate the vision into social realities. The latter is the role which our sovereign democratic state is called upon to play and to fulfil. Our state has to respond to the lofty visions embodied in the constitution, on the one side, and to the mounting urges and aspirations of the Indian people, on the other. Our state can play this high role effectively only if the people of India realize their responsibilities and opportunities of their citizenship of free India. It is to such free and responsible citizens who are called to the service of the nation in the Union and State and panchayat services, in the public and private industrial undertakings, and in the educational, medical and other professions, that Vivekananda's message goes today with a unique relevance and force so that they may become effective agents of the national development purposes, purposes which he had formulated in the following words in one of his letters written from Japan in 1893:

"….. to struggle unto life and death to bring about  a new state of things-sympathy for the poor and bread to their hungry mouths, enlightenment to the poor and bread to their hunger mouths, enlightenment to the people at large, and struggle unto death to make men of them who have been brought to the level of beasts by the tyranny of your forefather."