We know today that materialism whether of the capitalist variety in the West or the Communist variety in what is called the East (clearly, it is also of the West) have both failed to answer questions which man asks for himself. Both have solved some problems, but created many new questions. It was essential to solve these problems, we could not have the world divided into rich and poor; on the other hand to gap is growing. We could not afford to keep the vast majority of mankind not being regarded as part of the human race. Some of these are in our country. To improve them materially was the first step, but the other step is not less essential. Man cannot be at peace with the world unless he is at peace with himself. This is one step that has given us an understanding of such forces. Man has mastered nature, not by force, but by trying to understand these forces. That is why science has succeeded where magic has failed. 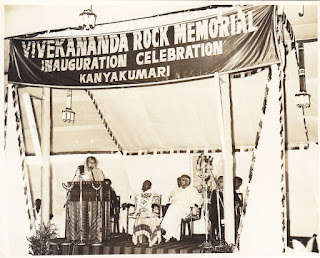 We understand some forces of nature and as we understand them, we discover that there are many other forces which are still beyond our understanding. We have not even attempted to understand the small creature, a very tiny speck in the universe, which we call man. This is what our philosophy has tried to do, but as I said earlier, that part most of us have conveniently ignored.

A WORLD IN FERMENT

I spoke of the new questions being raised. It is hoped that questions are raised, because, by doubting, we are led to inquire and by inquiring we are likely to understand. Today there is a ferment in India of one kind and in the entire world of another kind. And the ferment is there, because many of the young people find fault with the old values. Does that mean that old values are wanting? I don't think that it is so. But I do think that because, we, of the older generation have not lived up to the older values, the young people wonder whether they can emphasise these values or not. Therefore they try to search new paths. To us, some of these paths, some of these experiments, do not make sense. But if through this approach of trial and error we can find the truth at last, I think that even the upheaval will have served a purpose. The world has also these problems as we have in our own country. Many great people have shown that all this variety was really a part of one great Unity and that we always should speak of this Unity. And science itself is nothing else than the quest to discover Unity in the wide variety of our experience.