PRIME MINISTER'S VISIT TO THE

About a fortnight after the opening of the Memorial, i.e., on 16th September, 1970, the Prime Minister Shrimati Indira Gandhi, visited Kanyakumari to participate in the two-month-long celebrations organised by the committee to mark the completion of the Memorial. 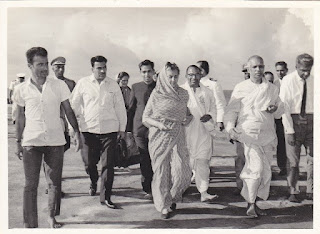 The Prime Minister reached Kanyakumari on the night of 15th September, 1970. The following day, after visiting the Kanyakumari temple, she flew to the Vivekananda Rock at 8.00 A.M. by a navy helicopter. The office-bearers of the Committee and Shrimat Swami Ranganathananda of the Ramakrishna Mission, who was specially invited by the Committee for the occasion, received the Prime Minister on the Rock.

Shrimati Indira Gandhi spent about half an hour on the Rock, going round the Shripada Mandapam, Sabha Mandapam and the Dhyana Mandapam. Paying homage to the memory of Swami Vivekananda, she placed flowers at the feet of his statue. 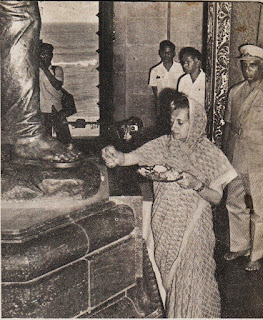 While going round the Mandapam, Swami Ranganathananda and the Committee's Organising Secretary, Shri Eknath Ranade, explained to her about the purpose and significance of the various structures put up on the Rock and also apprised her of the Committee's plan of further activities.

Flying back to the Mainland, the Prime Minister visited a Pictorial Exhibition on Swamiji's Life and Mission, Organised by the Committee under the able guidance of a reputed artist, Shri R. Goswami of Calcutta. A well-decorated temporary hall, put up near the Kanyakumari temple, housed the Exhibition.

The Prime Minister spent about 20 minutes in the Exhibition, evincing keen interest in many of the exhibits.

Shrimati Indira Gandhi then moved to the adjacent spacious pandal where she addressed a meeting organised by the Committee in her honour. The meeting was presided over by Shrimat Swami Ranganathananda.

After a vote of thanks proposed by Shri K.R. Sundararajan, Secretary of the Committee, the meeting concluded with national anthem.

It is a moving experience to come to Kanyakumari and see how the faith of thousands in Swami Vivekananda's Message has made possible this memorial. May it inspire all who visit it and give them the courage to live up to Swamiji's great and timeless teachings. The second phase of the programme for establishment of a lay order is no less important and will give practical shape to Swamiji's Message of Service.

I had the special privilege of being introduced to the writings, sayings, and life of Swami Vivekananda and the Ramakrishna Mission. That was when I was very small. In fact both may parents and specially my mother had very close connections with the Mission. And I can truly say that the words of Swami Vivekananda inspired the whole of my family, in our political work as well as in our daily lives. Today I would like to ask the same question which Swami Vivekananda asked, "Why is India alive? What is it that she is fighting for?" We are fighting for something which we must nourish and cherish. Without work and sacrifice in our lives, we cannot do that.

I should like to give my good wishes to this Committee which has done a great work of adding something to the memory of Swamiji in this place of pilgrimage which is so close to the hearts of all Indians. I don't think that a reminder was needed for Swami Vivekananda. But there are some who need this reminder, and therefore they provided it, and I hope it will be a source of strength to all those who come here.