SPEECH OF THE PRESIDENT SHRI V.V.GIRI - 2

SPEECH OF THE PRESIDENT SHRI V.V.GIRI ON THE OCCASION OF THE INAUGURATION OF THE VIVEKANANDA ROCK MEMORIAL AT KANYAKUMARI ON SEPTEMBER 2, 1970 - 2 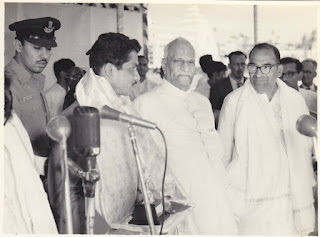 As one who has spent a major part of his life in concern for the common man, very early in life, I was deeply struck with Swami Vivekananda's realization that it was absurd to present spirituality before hungry millions. Swamiji pointed out that what people needed first were food and employment and only then could any spiritual feeling be aroused among the masses. He said: "For the next 50 years, let all other vain gods disappear from our midst. This is only God that is awake, our own race. Everywhere his hands, everywhere his feet, everywhere his ears, he covers everything. All other Gods are sleeping. What vain Gods shall we go after and yet cannot worship the God that we worship or Virat, of all those around us. These are our Gods, men and animals, and the first Gods we have to worship are our countrymen".
His was the religion of the living for he concerned himself most with the problems that in reality afflicted the people – hunger, ignorance, poverty and destitution. He held every man as a traitor who did not pay the least heed to the sufferings of humanity. He summarized his concept of brotherhood of man as follows: "What good is it if we acknowledge in our prayers that God is the father of us all, and in our daily lives do not treat every man as our brother?"
Swamiji stressed the cultivation of a power of introspection. He felt that unless man constantly developed an awareness and recollection of the ideal towards which he was striving, all work became mere bondage. He therefore, emphasized that one should work irrespective of the rewards, and he regarded work as the highest form of worship.
I was struck more than anything else by the Swamiji's emphasis that one can remain in the world as a householder and yet attain highest goal. In fact, Swami Vivekananda put across the question: "Which is the greater man – he who gives up the world and becomes a Sanyasi, or he who lives in the world and performs his duties as a householder?" He always said that to be an ideal householder was much more difficult than to be an ideal Sanyasi. The True life of work was, indeed as hard as, if not harder than, the equally true life of renunciation.
He emphasized that non-attachment is complete self-abnegation. The main effect of work done for others is thorough purification of ourselves. Doing good to others and constant realization that we are born in this world to serve 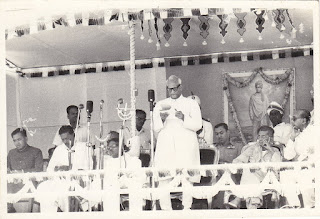 our fellowmen will help us to become better individuals and overcome one's preoccupation with one's own self.
Swami Vivekananda always referred to Buddha - the one who carried the teachings of "Karma Yaga" into perfect practice. Swamiji said that Buddha is the only Prophet who said, "I do not care to know your various theories about God. What is the use of discussing all the subtle doctrines about the soul? Do good and be good. And this will take you to freedom and to whatever truth there is'.
Swami Vivekananda's concept of universality of religion was unique. He said that by the study of different religions, we find that in essence they are one. When he was a boy he was sceptic and therefore, it seemed for a time that he must give up hope of religion. But, fortunately for him, he said that he studied Christianity, Islam, Buddhism and other religions and to his surprise, realized that the same foundation principles taught by his religion were also taught by other religions.
His religion is, to put in one word "humanism' embracing all religions of the world. He preached this great principle emphasizing the selflessness of the individual. He insisted on every individual acquiring character, integrity and truth, necessary for pursuing selfless service. He rightly said that the primary task was to develop individual character and if individual character was developed the character of the nation as a whole would automatically be built up. This is a lesson that we must remember every day of our lives. All our talk of establishing a society free from exploitation and want will be a mirage if we in our individual lives, whatever our position be and whatever our status be, do not adhere to certain fundamental values and norms that should guide our nation and thought.

--The main theme of my life is to take the message of Sanatana Dharma to every home and pave the way for launching, in a big way, the man-making programme preached and envisaged by great seers like Swami Vivekananda. - Mananeeya Eknathji