In the words of Mananeeya Dr M Lakhsmi Kumari Didi

Thousands of years I have stood motionless, surrounded by the surging waves of three mighty oceans. Who was I before? Can I recall anything from my post?

Yes, there is one clear picture ever shining in my memory, that of Devi Kumari standing on me, poised on one leg, in deep tapas. Every grain in me was throbbing at that divine touch. The ecstasy of those days! Around

her the elements stood still! 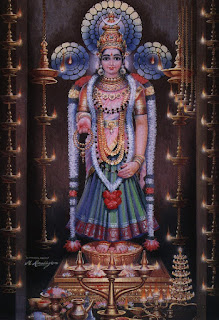 Such a delicate flower She was! Even my 'stony' heart meted at the sight of her. I was afraid her tender lotus foot would suffer, touching my hard surgace. Softly, I raised myself and formed into a cushion to hold her foot-But that was long long ago, in a different  world altogether. Yet, to this day, I proudly bear the imprint of the divine foot, my 'Srivatsa'

Centuries rolled by. I stood, a silent witness to the rise and fall of empires, to the glory, degradation at slavery of my Holy Motherland. I wanted to help my mother, offer myself to her. But how can a rock like me be of any service to anyone? Am I destined to remain a rock forever or like the renowned Ahalya, would some holy feet transform me, save me, redeem me, to serve my Motherland? It was then that I learned to pray and I started my tapas.

It all happened unexpectedly or was it the result my positive thinking, striving, to transform myself! 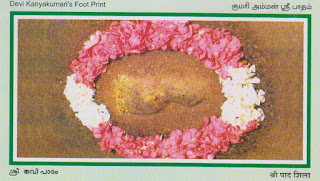 On a cold winter day, when biting chilly winds were sweeping over me, I was woken up from my reverie. I could feel the touch of holy feet on me. Has the Devi decided to do tapas again? No. the steps were stronger, harder and firmer. I strained every nerve to find out who the intruder was. Effortlessly, he climbed on to my lap sat down and was soon immersed in meditation. Something in me whispered that he was no ordinary trespasser. Very soon I began to feel the tremendous power and strength or his thoughts. This was no common man who could send pulsations through me. Am I about to receive the benediction that would transform my life into something more meaningful? Has my tapas borne its fruit? I was thrilled to the very core of my being, as these thoughts rushed into my mind.

The sage continued his meditation unmindful of the chilly winds or the passing of time. It was evident that he was in communion with the Supreme. Once again, I saw the beauty and grandeur of tapas the control of man over nature, internal and external. Mentally I prostrated at his feet and waited.

After three days and nights he came round. I vividly recall the picture he made as he stood looking at our beloved Motherland like a lion out to conquer his territory. There was a marvellous glow on his face. A new light shone in his eyes, of realization, of determination. Instantaneously, I recognized in him my Master and surrendered my all at his feet.

Unaware of the gift he was leaving behind, he plunged into the sea. I stood again in isolation, but I knew that I would never be the same again. Destiny had at last intervened and set me on the path of my salvation. I had found my Lord and Master. It was given to me to share those blissful moments with him to contain and preserve the dynamic vibrations of his powerful meditation till such a time, when……

I woke up from my reveries and looked around. For me who reckons time in centuries, it was as though a few moments had passed. But seven decades had flown by, decades filled with incidents that have left their indelible imprints on the pages of history. My Motherland was at last free from the yoke of alien domination. Her face was aglow with happiness, anticipation and a sense of achievement. Great sons of hers had come and gone adding their share to her glory and greatness – but none to equal my Master.

1963: That was the Centenary year of his birth. All of a sudden I found myself in the lime light for the humble role I played in my Master's life. Swami Vivekananda that is how they called him. Many considered him as the architect of modern India – one who brought back to our Motherland, her lost honour and dignity and set her well on the path to freedom. Ah! To have been the participant of the great drama of his life and to receive the recognition thereof ! Realisation of my immense responsibility dawned on me then and I vowed myself to fulfill it to the best of my ability.

Scores of people came to look at me, measure me, drill a hole here and cut a stone there. I submitted silently. At first, I did not know the meaning of all that. Then, one fine day, I heard the words, which were to be the fulfilment of my dream, my tapas, my sadhana. A magnificent monument for my Master was to be erected on me-the Vivekananda Rock Memorial.

From that moment onwards, the 'I' in me became totally extinct. A new spirit of transformation, of renunciation and surrender pervaded my whole being. Centuries old lethargy was dropping away. I was to be an instrument to broadcast his message-the great thoughts and ideas that had come to him as he sat on me and the vibrations of which I had carefully preserved over the years, deep in my heart. Through me, millions would now receive them and transform their mundane existence into something sublime. I have been called upon to serve my Master, my Motherland and my people. The moment was at hand for me to surrender, to offer my all.

I was re-born on that day and that I consider my first birth-day. What marked my infancy was a saga in human dedication, skill, discipline and surrender. Never in the history of our country had so many participated in such a dedicated evdeavour - to erect a monument for one of its noble sons. It also marked the beginning of a movement aimed at the freedom of the human soul.

My infancy was not without its share of troubles. There were moments of agony and ecstasy. Agonising were the moments when due to vagaries of human nature, all seemed lost. It needed indomitable courage and will to surmount man-made obstacles and carry on. I would rather not recall those memories. What remains for posterity are truly moments carved out of dedication, sacrifice, love, understanding, surrender and acceptance. From those who were toiling on me day and night with no concern for themselves, I learned my first lessons in renunciation and service.

Stone by stone, the marvel on the rock in the sea took shape. As each granite piece turned into 'marble', my master's words 'Each soul is potentially divine' echoed through my mind. Poems on stone were created through labour of love. Understanding and vision blended art. Architecture and styles of the past and the present to create a picture of beauty and harmony. Each day taught a new lesson, brought a new vision.

The installation of my Master's statue was at the point where he sat in mediation on me. There he was to stand, at our Mother's feet as her Guardian Angel for generations to come. My days of isolation and despair were gone forever. I was no more a simple rock. From now onwards I shall bear his name. I shall carry on me the temple perpetuating the memory of a saint who showed how to manifest the divinity inherent within the human soul, who revealed that in spirituality lies the strength of our Motherland and renunciation and service should be here twin ideals in life, who gave lessons in transforming work into worship. As I started unlocking the treasury of thoughts he had left with me, each and every stone took a new luster and every nook and corner became surcharged with his dynamic vibrations.

Those who knew not my Master, laughed and scoffed at the idea and said it would be a life - time job to erect a monument in the sea.  Little did they realise that through total surrender, one gets transformed into an instrument in the Almighty's hands and it is he who would then work through us. It look only six years for the citadel to be completed. Today, as it rises above the waves as a symbol of all that India stands for-her cultural variance and beauty, her ethos, her philosophy, her tolerance and her unparalleled universality, it is my Master whom. I see standing there on that never-to-be-forgotten morning, epitomizing all this and more.

I was filled with humility when the great Swami of the Order, founded by my Master came to consecrate the temple. Pride swelled within me when our President landed on me to inaugurate the Memorial. I was already seven years old then. Oh! The crowd that surged through me in those days! It was truly a National festival. Realisation came to me then that I cannot remain just as a monument or a tourist attraction. The immensity of the responsibility vested in me, dawned on me. I became aware of the great role I will have to play in the destiny of our Nation.

Prime Ministers have come to pay obeisance at my Master's feet – Men, women and children flock to me in thousands every day to see me, the marvel of spiritual power, standing in a tangible form on the rock in the mid-sea. In me, today the Nation stands united, integrated. I and my Master are one today. I have become the symbol of the Universal Brotherhood that was Swamiji himself.