When I first met Vivekananda in 1881, we were fellow-students of Principal William Hastie, scholar, metaphysician, and poet, at the General Assembly's College. He was my senior in age, though I was his senior in the College by one year. Undeniably a gifted youth, sociable, free  and unconventional in manners, a sweet singer, the soul of social circles, a brilliant conversationalist, somewhat bitter and caustic, piercing with the shafts of a keen wit the shows and mummeries of the world, sitting in the scorner's chair but hiding the tenderest of hearts under that garb of cynicism; altogether an inspired Bohemian but possessing what Bohemians lack, an iron will; somewhat peremptory and absolute, speaking with accents of authority and withal possessing a strange power of the eye which could hold his listeners in thrall. 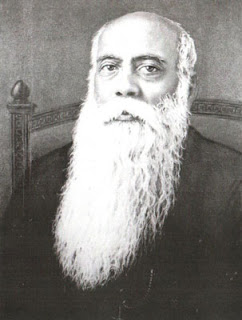 This was patent to all. But what was known to few was the inner man and his struggle-the Sturm und Drang of soul which expressed itself in his restless and Bohemian wanderings.

This was the beginning of a critical period in his mental history, during which he awoke to self-consciousness and laid the foundations of his future personality. John Stuart Mill's Three Essays on Religion had upset his first boyish theism and easy optimism which he had imbibed from the outer circles of the Brahmo Samaj. The arguments from causality and design were for him broken reeds to lean upon, and he was haunted by the problem of the Evil in Nature and Man which he, by no means, could reconcile with the goodness of an All-wise and All-powerful Creator. A friend introduced him to the study of Hume's skepticism and Herbert Spencer's doctrine of the Unknowable, and his unbelief gradually assumed the form of a settled philosophical skepticism.    His first emotional freshness and naivete were worn out. A certain dryness and incapacity for the old prayerful devotions, an ennui which he concealed under a nonchalant air of habitual mocking and scoffing, troubled his spirit. But music still stirred him as nothing else could, and gave him a weird unearthly sense of unseen realities which brought tears to his eyes.

It was at this time that he came to me being brought by a common friend, the same who had introduced him to the study of Hume and Herbert Spencer. I had had a nodding acquaintance with him before, but now he opened himself to me and spoke of his harassing doubts and his despair of reaching certitude about the Ultimate Reality. He asked for a course of Theistic philosophic reading suited to a beginner in his situation. I named some authorities, but the stock arguments of the Intuitionists and the Scotch common-sense school only confirmed him in his unbelief. Besides, he did not appear to me to have sufficient patience for humdrum reading-his faculty was to imbibe not so much from books as from living communion and personal experience. With him it was life kindling life and thought kindling thought.

I felt deeply drawn towards him, for I now knew that he would grapple with difficulties in earnest. I gave him a course of readings in Shelley. Shelley's Hymn to the Spirit of Intellectual Beauty, his pantheism of impersonal love and his vision of a glorified millennial humanity moved him as the arguments of the philosophers had failed to move him. The universe was no longer a mere lifeless, loveless mechanism. It contained a spiritual principle of unity.

The sovereignty of Universal Reason, and the negation of the individual as the principle of morals, were ideas that soon came to satisfy Vivekananda's intellect and gave him an assured conquest over skepticism and materialism. What was more, they furnished him with the card and compass of life, as it were. But this brought him no peace. The conflict now entered deeper into his soul, for the creed of Universal Reason called on him to suppress the yearnings and susceptibilities of his artist nature and Bohemian temperament. His senses were keen and acute, his natural cravings and passions strong and imperious, his youthful susceptibilities tender, his conviviality free and merry. To suppress these was to kill his natural spontaneity-almost to suppress his self. The struggle soon took a seriously ethical turn-reason struggling for mastery with passion and sense. The fascinations of the sense and the cravings of a youthful nature now appeared to him as impure, as gross and carnal. This was the hour of darkest trial for him. His musical gifts brought him associates for whose manners and morals he had bitter and undisguised contempt. But his convivial temperament proved too strong for him. It was, therefore, some relief to him when I occasionally kept him company of an evening when he went out for a musical soiree.

I saw and recognized in him a high, ardent and pure nature, vibrant and resonant with impassioned sensibilities. He was certainly no sour or cross-grained puritan, no normal hypochondriac; he would indulge cynically in unconventional language except when he would spare my innocence. He took an almost morbid delight in shocking conventionality in its tabernacles, respectability in its booths; and in the pursuit of his sport would appear other than he was, puzzling and mystifying those outside his inner circle of friends. But in the recesses of his soul he wrestled with the fierce and fell spirit of Desire, the subtle and illusive spirit of Fancy.

He confessed that though his intellect was conquered by the universal, his heart owned the allegiance of the individual Ego and complained that a pale bloodless reason, sovereign de jure but not de facto, could not hold out arms to save him in the hour of temptation. He wanted to know if my philosophy could satisfy his senses, could mediate bodily, as it were, for the soul's deliverance; in short, he wanted a flesh and blood reality visible in form and glory; above all, he cried out for a hand to save, to uplift, to protect, a Shakti or power outside himself which could cure him of his impotence and cover his nothingness with glory-a Guru or master who by embodying perfection in the flesh would still the commotion in his soul.

At the time, this appeared to me a weakness born of unreason, this demand for perfection in the flesh and for a power out of ourselves to save-this sacrifice of reason to sense. My young inexperienced self, confronted with this demand of a soul striving with itself, knew not wherewith to satisfy it, and Vivekananda soon after betook himself to the ministers and missionaries of the Brahmo Samaj, asking Brahmos with an unconscious Socratic Irony for an ideal made real to sense, for truth made visible, for a power unto deliverance. Here he had enough, he bitterly complained, of moral disquisitions, principles, intuitions for pabulum which to him appeared tasteless and insipid. He tried diverse teachers, creeds and cults,  and it was this quest that brought him, though at first in a doubting spirit, to the Paramahamsa of Dakshineswar, who spoke to him with an authority that none had spoken before, and by his Shakti brought peace into his soul and healed the wounds of his spirit. But his rebellious intellect scarcely yet owned the Master. His mind misgave him and he doubted if the peace which would possess his soul in the presence of the Master was not illusory. It was only gradually that the doubts of that keen intellect were vanquished by the calm assurance that belongs to ocular demonstration.

I watched with intense interest the transformation that went on under my eyes. The attitude of a young and rampant Vedantist-cum-Hegelian-cum-
Revolutionary like myself towards the cult of religious ecstasy and Kali-worship, may be easily imagined; and the spectacle of a born iconoclast and free-thinker like Vivekananda, a creative and dominating intelligence, a tamer of souls, himself caught in the meshes of what appeared to me an uncouth, supernatural mysticism, was a riddle which my philosophy of the Pure Reason could scarcely read at the time. But Vivekananda, "the loved and lost" was loved, and mourned  most in what I could not but then regard as his defection; and it was personal feeling, after all, the hated pathological element of individual preference and individual relationship, which most impelled me, when at last I went on what to a home-keeping recluse like myself was an adventurous journey to Dakshineswar, to see and hear Vivekananda's Master, and spent the greater part of a long summer day in the shady and peaceful solitude of the Temple-garden, returning as the sun set amidst the whirl and rush and roar and the awful gloom of a blinding thunder-storm, with a sense of bewilderment as well moral as physical, and a lurking perception of the truth that the majesty of Law orders the apparently irregular and grotesque, that there may be self mastery in apparent self alienation, that sense even in its errors is only incipient Reason and that faith in a Saving Power ab extra is but the dim reflex of an original act of self determination. And a significant confirmation of all this came in the subsequent life-history  of Vivekananda who, after he had found the firm assurance he sought in the saving Grace and Power of his Master, went about preaching and teaching the creed of the Universal Man, and the absolute and inalienable sovereignty of the Self.