The awakening of the soul to its bondage and its effort to stand up and assert itself — this is called life. Success in this struggle is called evolution. The eventual triumph, when all the slavery is blown away, is called salvation, Nirvâna, freedom. - Swami Vivekananda

Bhagat singh narrated how Ramtirtha often wept while seeing the setting sun in America :" Now you are rising in my beloved country. Drop my tears like dew drops over the beautiful waterfed field of India."

Bhagat singh also praised Swami Vivekananda from Bengal. He felt proud that both men earned fame for propagating the glory of Indian metaphysics abroad. He woefully noted that Vivekananda's mission become a permanent institute in Bengal.

Anushilan Samiti, which was formed in Calcutta in 1894, had divided revolutionary into two categories : those who believed in religion and those who did not. Most revolutionary of Bengal at that time were influenced by Bankim Chandra Chattergee and Swami Vivekananda. Samiti members had to read Hindu scriptures, especially the Geeta. Songs and slogans based on Hindu myths inspired Bengal's revolutionaries in early 20th century.

(The Martyr: Bhagat Singh Experiments in Revolution by Kuldip Nayar) 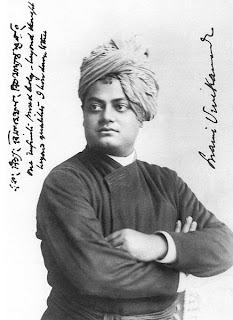 Hem Chandra said: It was Swamiji who first exposed the mean, insidious plot of the British to destroy India politically, morally,culturally and intellectually, so that Indians would remain slaves forever. Hence, you’ll find in my article this comment that Swamiji served the nation more as a National Patriot of the first order rather than as a Religious Awakener, as a Prophet of militant nationalism. India’s slavery agitated him profoundly. This agony burst forth in his speeches with a dazzling flame of fire. His speeches electrified the whole nation and his complete works served as a continuous stream of inspiration to the whole of India, particularly to the Revolutionaries of Bengal. In fact, every freedom fighter, derived strength and inspiration from the Bhagavad-Gita and the speeches and writings of Swami Vivekananda. In our youthful years, these were our constant companions. Whenever the British Police searched the homes of the Revolutionaries, invariably they found copies of Swamiji’s speeches, his letters, and the Gita. The Police were thus convinced of the close association of Swamiji with the Indian freedom struggle.

Swami Purnatmananda: Your last statement during our previous interview profoundly impressed me.

Hem Chandra: What had I said, can you tell me?

Swami Purnatmananda: You had said - I had the good fortune to see Swamiji in flesh and blood. I have never seen anyone else who can stand on an equality with Swamiji. I could not even bow my head or touch Gandhi ji’s feet after touching the feet of Swamiji.

Hem Chandra: (with great emotion and enthusiasm) Yes! I had the great good fortune to have seen him. I touched his feet. I can still feel his fiery touch as he blessed me on the head and shoulders. Oh! Those few moments with Swamiji are the most unforgettable and enchanting moments of my life, because then I learnt how to love my Motherland Bhartavarsha. Then I felt how terrible and painful it was for my people to live like slaves of the British. I had gone to him to learn about Religion. But what a remarkable lesson he taught me that day! He opened our eyes to patriotism and nationalism. He set fire to our inmost being. That fire still burns in me today, as brightly as in 1901. That fire is Vivekananda. That fire’s other name is Bharatavarsha –the undivided Bharatavarsha extending from the Himalayas to the Indian Ocean. That India had to be freed from the British yoke - but not merely this. India had to establish herself as a Shining Guide and Teacher of Humanity in the arts of Peace, Civilisation and Culture. She had to be made the Queen of all the nations of the earth. This heavy task was given to us young revolutionaries to complete by Swami Vivekananda. It was Swamiji who boldly and fearlessly started this movement for National Resurgence. He gave us the onerous task of advancing and fulfilling the pledge, this dream, this hope, this vision, this destiny. But have we been able to do his bidding? Have we been able to hold aloft his great banner? Why, I have witnessed almost a full century of struggle and achievement. Perhaps, his Spirit will reject us as unworthy, and he will look for his fresh soldiers among the new generation of Indian youths. I was told by Kamakhya Mitra that Swamiji had expressed such a hope to Swami Saradananda.
(I am India)