In memories of Ella Wheeler Wilco 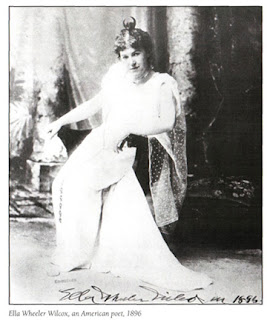 The year following the Chicago Exposition and Congress of Religions, the East Indian Monk, Swami Vivekananda, came to New York and gave a course of lectures. My husband was then passing through a business crisis which required all of his courage and self-control. We first heard of these lectures in a    some what curious way. One evening, just after dinner, the postman brought a letter; it was from a stranger, addressed to me, and had been three times forwarded. It told of a lecture to be given by Vivekananda, giving the time and the place, and closed, saying; `I feel sure, from what I read of your writings, that you will be interested.' The hall where the lecture was to be given was just two blocks from our apartment, and the date was just one hour from the time I received the letter. We had no other engagement for that evening, and my husband proposed  going.

We reached the hall just as Vivekananda was going on the stage in his robe and turban. We sat in the very last seat of the hall, clasping each other's hands as the impressive orator gave a never-to-be-forgotten talk on things spiritual. When we went out my husband said: 'I feel that man knows more of God than we do. We must both hear him again.'

My husband attended with me not only a number of evening lectures, but on several occasions came from his business office during the day to listen to the Swami. I remember him saying, as we went out on the street one day: 'This man makes me rise above every business worry; he makes me feel how trivial is the whole material view of life and how limitless is the life beyond. I can go back to my troubles at the office now with new strength.'.