THE MESSAGE OF SWAMI VIVEKANANDA

Why is it that of all ancient civilizations that have grown and flourished on this planet, it is India's alone, that survives unbroken from the very drawn of history? There have been other great civilizations in this world. There were ancient Egypt and Babylon and there were the great South American civilizations of the Mayas and the Aztecs. There was a great flowering of the human spirit in different parts of the globe. But they all died and today the people living in those land do not have any direct contact, any direct link, with those great achievements of the past. It is India alone that, despite all vicissitudes, despite the fact that we were under foreign domination for many centuries, despite all the turmoil and troubles through which we have passed, nevertheless, has succeeded in retaining our links with the very dawn of our civilization.

ROOTED IN THE SPIRIT 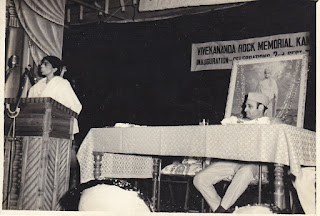 I think the answer lies in the very unusual phenomenon, that in India, whenever it appeared that the light was going out, whenever it appeared that the Indian spirit and civilization were finally going to succumb under the pressure of aggression from abroad or decay from within, whenever the spark and spirit of India appeared finally on the point of extinction, there arose in this country, great men and women, who kept the torch of faith burning, who once again illumined this country with the fire of their spiritual realization. They once again, fanned the dying spark of Indian Civilization into a mighty flame that carried its light across the seven seas. The whole History of India can be looked upon from this point of view. You find situation in which we are surrounded by darkness, and the light once again, is reborn and the Indian spirit takes new courage and new sustenance.

One such period, I would like to take your mind back is the middle of the nineteenth century. In 1857, the first Indian War of Independence or the Indian Mutiny as it is generally known had been crushed by the British and our country lay broken and prostate at the feet of a foreign conqueror. This time, the defeat was not only physical and material, it was also spiritual, because at that time the people of India, had begun to feel that it was their religion and their culture, their philosophy and their civilization, that were the cause of their defeat.  And there was a moral and spiritual vacuum and it appeared once again that finally after so many centuries, the India, that we know, would pass away. But once again the same miracle occurred. Once again there was a rebirth and a and within a short period of a few decades India was once again regenerated and India was glowing with faith and confidence.