This is the most extraordinary thing that had happened. The renaissance began in Bengal. It was Bengal that first had to face the impact of British rule and the Bengalees with their extraordinary qualities and gifts of mind and spirit, were the first to respond to new challenges that foreign domination was throwing before us. Raja Ram Mohan Roy is looked upon as the father of Indian renaissance and it was he who started the social reform movement in order to purge our society of the evils and superstitions that had come to be covered with the name of religion. After him, Maharshi  Debendra Nath Tagore and Shri Keshab Chandra Sen of the Brahmo Samaj of India continued the renaissance. In Maharashtra, Mahadev Govind Ranade and R. G. Bhandarkar started the Prarthana Samaj. In Punjab, the Arya Samaj was started by Dayanand Saraswati. The Theosophical Society also did valuable work and so a number of movements of this type grew up throughout the century. But the main beacon light of spiritual power and strength that rose in the nineteenth century at a time when darkness was all around was in the form of Ramakrishna Paramahamsa. This extraordinary man, unlettered and untutored though he was, expressed in his personality and his life, the highest flights of spiritual achievement.  And he became a veritable spiritual magnet, attracting to his feet at Dakshineshwar, the rich and the poor, the wise and the uneducated, people from all corners of the country. They came to him in search of truth and in search of wisdom. And he, by the fire of his spiritual personality brought about a virtual spiritual renaissance in this country. 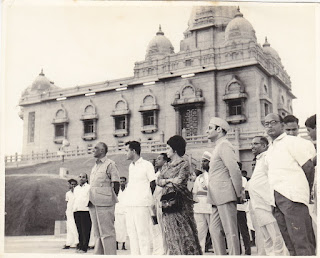 Among the many people, who came to the feet of Sri Ramakrishna, was one Narendranath Dutta, who subsequently became famous the world over as Swami Vivekananda. The relationship between Sri Ramakrishna and Swami Vivekananda, the way Swamiji first met the Master, how his rational mind tried to fight the tremendous spiritual power that Sri Ramakrishna expressed and finally he surrendered himself to that power and became the leading disciple of Sri Ramakrishna, is a fascinating story. Swami Vivekananda lived a very short life, in the normally accepted sense of the term, only 39 years from 1863 to 1902. And yet how much did he achieve in this very short period! His was a rich life. I do not think it is necessary for me, on this occasion, to go into all its details, his boyhood, the domestic problems that he faced, his meeting with the Master, that tremendous moment in which he surrendered himself to Sri Ramakrishna and the floodgates of spiritual experience open to his psyche, and his experience, for the first time, of the tremendous impact of spiritual realization. Then came his period of disciple hood, and after the passing away of Sri Ramakrishna, his travels as an itinerant monk throughout the length and breadth of this country.

THE ROCK OF AGES

Aasetu Himalaya Paryantam (आसेतु हिमालय पर्यन्तम), He travelled from the Himalayas down to this beautiful Kanyakumari at the feet of Mother India, where three great oceans meet. It was during these days of his travel as an unknown and itinerant monk, that he swam across from here----the mainland ----to the rock upon which now stands such a magnificent memorial. And he sat there and meditated upon India that had gone into the past, the India that existed at that time and the India that would arise in the future. Therefore it is particularly fitting that we are meeting here in Kanyakumari today to pay homage to Swamiji. It is indeed fitting because Swamiji was a devotee and a worshipper of Mother India, and as such he should stand eternally at the feet of the Mother, looking upwards at the vision of India, that he saw during his meditation here.