There is one aspect of his message, that I would like to place before you and that is his stress on the unity of all Religions. Unity, we must remember, not tolerance, because tolerance is essentially a negative aspect, a negative approach. In other words, you are prepared to tolerate people other than your own. You do not persecute them, you just tolerate them. But this was not what Swamiji meant. His approach was a positive one---born out of the Sadhana and realisation of Sri Ramakrishna himself. Even the course of his spiritual practices had actually followed the 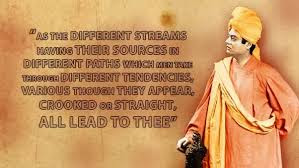 disciplines of various religions and had found that they reach finally the same goal. The Rig Veda has it, " Ekam Sat Vipra bahuda Vadanti" The truth is one; there may be many ways of reaching it. The Munduka Upanishad says: (यथा नद्यः स्यन्दमानाः समुद्रेऽस्तं गच्छन्न्त नामरूपे विहाय | तथा विद्िान् नामरूपाद् विमुक्तः परात्परं पुरुषमुपैतत ददव्यम् ॥)
Yatha nadyah syandamanah samudre astam gacchanti namarupe vihaya
Tatha vidvannamarupadvimuktah paratparam purushamupaiti divyam
As brooks rising from different parts of the country finally find their way to the same ocean so do the various religions known to man rise in the different parts of the world but all ultimately lead towards the same spiritual goal. This is one of the basic features of our civilization and, I think one of the keys for our survival and persistence in all parts and ages. And therefore the first point Swamiji emphasized was the unity of all religions; all bigotry, hatred and persecution which is done in the name of religion are in fact completely against the spirit of religion. It is indeed a travesty of religion. Because anybody who is a truly religious man can never use the powers of religion to hurt anybody else. Religion teaches ultimately that all men are bound together in divinity. And therefore, these people who try to preach bigotry in the name of religion, who try to wage war in the name of religion are people who do not understand the very basis upon which all religions have been born. This is true. This we would do well to remember today, because not only India, but the whole world is full of people belonging to different religions, and even today we find it that the name of religion is used to set man against man. And therefore Swamiji's first point was that all Religions are one. He used to say that if you are a Christian try to be better Christian and if you are Mussalman, try to be a better Mussalman and if you are a Hindu - a believer in Sanatana Dharma, then try and really drink again at the springs of your spiritual foundation if you really call yourself religious.

DIVINITY IN MAN
The second point closely allied to this, is the Divinity of man. The Upanishads have an extraordinary word for it. "Amritsya Putrah!" Children of Immortality!!! The seers of the Upanishads saw that all human beings, irrespective of their race, their creed, their language, their religions, their nationality their place of residence, the colour of the skin, or the texture of their hair contain within them the spark of Divinity. And therefore they are bound together by a Divine Bond that no amount of bigotry and no amount of pettiness can ultimately sunder. Swamiji spoke of the Divinity of Man and along with it, the unity of Mankind. Our message, our approach should cover within its ambit, the entire human race.