AN IDEAL FOR YOUTH

Ya Devi Sarvabhuteshu Shaktirupena Samsthita. This is the shakti that resides in the heart of all beings. And this is the shakti that must be worshipped if we are to reach our goal--- material or spiritual. And he said, I quote him again, "And here is the test of truth. Anything that makes you weak physically, intellectually and spiritually, reject as poison. There is no hope in it. It cannot be true. Truth is strengthening." So, for the achievement of his ideals, Swamiji looked upon the power of Shakti. And his message was particularly directed to the youth of the country and I am glad to see in the audience this evening, many people belong to the younger generation. Because it was to them that Swamiji mainly spoke and he said that we need youths with "muscles of iron and nerves of steel" It is going to be no easy task to build the new India. In India today, fully one-seventh of the human race resides and we still have the backlogs of poverty, ignorance, and illiteracy. If these are to be finally overcome we will require a new generation, a younger generation committed and dedicated to these ideals. In India today, the you 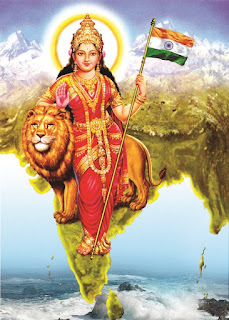 th is going through a very difficult stage. It has to choose between the pulls of two shaktis. There is a power of destruction, of bomb throwing, of outrages, of violence, and on the other hand there is the power of construction, the power whereby a country can be rebuilt. These two paths are open to us today. And I would submit that Swamiji has laid before us a goal which we should follow, the goal of the Unity of India.

The most important thing today is to reiterate our unity. From all over India, we have met here today at the feet of Mother India in the same way as the three oceans meet at the feet of mother India. And in a way it is symbolic of the fact that India is a Unity and despite what anyone may say, India will remain a unity. And that is the destiny of India to develop and grow as a unified nation. It is  here that we are going through difficult times today, but consider how much more difficult the times must have been when Swami Vivekananda preached. That was at a time when foreigners were ruling in this country, when it was a sin to mention our own Vande Mataram. Vande Mataram could not be uttered in public because it was banned by our foreign rulers. It was a time when there was complete fragmentation and atomisation in India. If at a time like that, Swamiji did not quail, did not fear, did not despair, why should we despair today? It is true that we are in difficult times. But then, times are never easy. No nation is built unless generations are prepared to dedicate their lives, their sweat, their toil and their tears for it. And I would suggest that if India is to achieve its destiny, as I am sure it will, we in our generation have got to rededicate ourselves to it. It seems to me that there is no better guide in these troubled times than Swami Vivekananda. He stands in this magnificent Rock Memorial looking at India. It is his vision. He is a Rishi, a Drashta, a seer. He has seen the vision of India. It is for people like you and me to try and fulfil that vision it may not be fulfilled in a single life-time. What, after all, is one's life-time in the history of a country which has a recorded past of many thousands of years? But we must work towards it. We must fight all tendencies that go against the unity of India, that go against the unity of religion, that go against the Divinity of Man, that go against the service and uplifting of society. We must strengthen all those forces within ourselves and outside which are committed to the regeneration of India. This to my mind is the truest way of paying our homage to Swami Vivekananda. He always used to quote that magnificent passage from the Kathopanishad that we should Arise, Awake and stop not until the Divine Goal was reached. It is the difficult task. It is as sharp and difficult to read on as the razor's edge. But we must press forward. There is no turning back. India has embarked upon its destiny. No power in the world now can turn it back. How soon it reaches the destiny depends upon people like you and me, and upon whether we are able to understand what Swamiji has said, to make it a part of our lives and to live it in our day-to- day existence. With these words, my friends I will take leave of you, quoting finally the great message from the Kathopanishad that Swamiji was so fond of