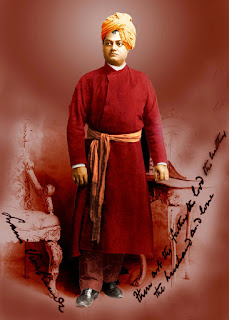 After that, of course, he went abroad. Then followed his dramatic triumph at the Chicago Congress of Religions, his triumphant return to India this time not as an unknown monk but as a conquering hero; his second visit to Europe the founding by him of the Ramakrishna Mission and then finally his Mahasamadhi  after consecrating the Belur Mutt. In the course of this short life, Swami Vivekananda achieved virtually a miracle. He not only formulated the very essence of Hinduism, to meet the requirements of his age, but also of religion itself, of Universal Religion. Because all the great teachers of India have always looked upon themselves as people who respect eternal truths, we do not claim them to be the authors of new truth. We can merely state that they have realised the truths of old and are restating them in the idiom of the modern age

Today not only India, but the entire world, faces a deep crisis. The past that we know is crumbling before our eyes and the future is struggling to be born. And our generation finds itself poised precariously between the past and the future. It is an interesting situation in the world today. On the one hand, Science and Technology, have given men unrivalled and unprecedented power to transform, if he so desires, life on this planet, to wipe away poverty, misery, ignorance, disease, want and suffering. On the other hand this very power can, if misused, lead to the complete annihilation not only of human race, but indeed of all life upon this planet. And therefore, today, man-kind finds itself poised at a crucial cross-road on its long and tortuous history of the last many thousand years upon this planet. Let us think about this. It seems to me that the message of Swami Vivekananda is even more needed today than it was at the time when he delivered it. I will try this evening to share with you what I consider to be the main feature of Swami Vivekananda's message, which we should look upon not merely with a historical interest but as something which has touched each one of us and touched the future of human race very deeply. Swamiji said, and quote his words, "My ideal indeed can be put into few words. To preach unto mankind their Divinity and how to make it manifest in every movement of life."