The Cities of Buddhism - 3 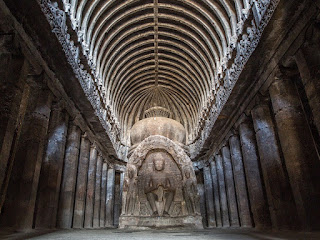 The work of the monk, then as a witness to the eternal verities, was in no rivalry to the more civic function of the Brahmanic priesthood. And this is the fact which finds expression in the relation of the monkhood to the Indian cities of the Ashokan era. The Brahmin is a citizen-priest, living in a city. The Buddhist is a monk, living in an abbey. In all lands the monk has memorialised himself by buildings instead of by posterity. In India these have been largely carved, as at Mahabalipuram in the south, or excavated, as at Ellora and elsewhere, instead of built. But the sentiment is the same. In place of a single monastery with its chpel or cathedral, we find here a number of independent cells or groups of cells, and frequently a whole series of cathedral shrines. Apparently a given spot has remained a monastic centre during generation after generation. Dynasties and revolutions might come and go, but this would remain, untouched by any circumstances save the inevitable shifting of population and the final decay of its own spiritual fire.

In its decoration the abbey would reflect the art of the current epoch. In culture it would act as a university. In ideals it represented the super-social, or extra-civic conception of the spiritual equality and fraternity of all men. Its inmates were vowed to religious celibacy. And we may take it that the place of the abbey would always be at a certain distance from a city whose government was in sympathy with it.

Thus the city of Dhauli, under the Emperor Ashoka and succeeding worshippers of Buddha, had Khaandagiri at seven miles' distance as its royal abbey. The civic power was represented at Gaya: the monastic at Bodh-Gaya. Benares was the seat of Brahmins : Sarnath of monks. Elephanta was the cathedral-temple of a king's capital, but Kanheri, on another island a few miles away, offers to us the corresponding monastery.

From these examples and from what we can see to have been their inevitableness, we might expect that any important city of the Buddhistic period would be likely to occur in connection with a monastic centre some few miles distant. Now it is possible to determine the positions of a great many such cities on grounds entirely a priori. It is clear, for instance, that whatever geographical considerations might make Benares great would also act at the some time to distinguish Allahabad. By a similar induction, Mathura on the Jamuna and Hardwar on the Ganges might also be expected to furnish proof of ancient greatness. Now outside Prayag we have to the present time, as a hanut of Sadhus, the spot known as Nirvanikal. And in the vicinity of Hardwar is there not Hrishikesh? The caves of Ellora have near them the town of Roza. But this we must regard as a sort of Mohammedan priory, inasmuch as its population consists mainly of religious beggars (of course not celibate) living about the tomb of Aurangzeb. The neighbouring capital that supported the youth of Ellora was probably at Deogiri, now called Daulatabad.