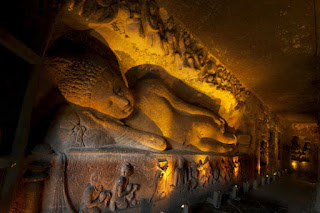 Many of the great Chaitya-halls were built between the time of Ashoka and the Christian era, but the Stupas which they contain are simple reliquaries. The Dagaba bears no image, though it is often ornamented with an Ashokan rail. Sculpture was in existence at this early date, but it seems to have been used always as a medium of secular commemoration, as at Karle and Bharhut. The religious symbolism of Buddhistic devotion seems to have been at this period the tree, the Stupa, the rail, the horseshoe ornament, and sometimes a footprint. Nor can we adequately realise the thrill of sympathy and reverence which these austere and simple forms were at that time capable of producing in a susceptible mind.

The recognition of the Bodhisattvas, however, which deal. It really connoted sooner or later the acceptance, more or less entire, of what may be called the Asiatic synthesis. And it too seems to go hand in hand with the worship of the personality of Buddha himself. It was in fact the emergence of a doctrine for which India has ever since been famous. It was an outbreak of the tendency known in Christianity as the religion of the Incarnation, a form of adoration by which Protestant England herself has well-night been torn in twain during the last fifty years. Whether or not Buddhism had before this inculcated the adoration of the Buddha's personality, no one who had read any of the early scriptures can doubt that she was always very ready for such a doctrine. There is a fine sentiment about every mention of the Teacher's name. One can feel the intense sacredness of each of his movements to the early recorder. And the worship of relics, so early as the moment of the Mahanirvana itself, is an evidence not to be set aside. The doctrine of the divinity of Buddha, and his miraculous birth into a world long preparing for his advent, must in the year A.D. 150, have been only the kystone of an arch already built. Here we have the picture of the self-projection in to the sphere of Maya of a soul immeasurably higher and sweeter than those dragged there by their own deeds. It is the theory which reappears in widely separate times and places under the names of Christ, Rama, Krishna, and Chaitanya. Even the Persian Bad would seem to owe the idea that makes him possible to this Indian "superstition," as it has been called.

This was the movement that placed in each new Vihara excavated at Ajanta its Buddha shrine. Whether Seven or Eleven is the older it is difficult to determine, but each contains its image in its shrine. This fact coincides with a further step taken about this time. The ancient abbey with its Bhikshugrihas began to transform itself into a university. Each of these new and more ambitious Vihars is a college as well as a monastery. We are very familiar, from the study of Burma and Japan, with the educational system in which every student is theoretically a novice of the monastery. Something of the same sort is true to this day of Oxford itself. And there can be no doubt that is obtained at Ajanta. It was with this emphsising of the function of the Sangharama as the abode of learning that the image of the great teacher became all important. For organised worship the Chaitya-halls always sufficed. The image in its shrine doubtless received a certain ritualised attention morning and evening - above all, incense was burnt before it-but its main purpose was to keep the students in mind of the great Guru, the divine teacher and ideal, in whose invisible presence every act was to be performed. It is this academic aspect of the life at Ajanta which speaks in the long rows of Viharas dug out within single epochs. Four to One can not be far removed from Seventeen, and this fact can only be accounted for in this way. Of the learning that was imparted in these monastic colleges we read in Hiouen Tsang. From the beginning the texts must have been recited constantly in the abbey-halls. But that secular learning also was sometimes cultivated, we are expressly told in the case of Nalanda, where arithmetic and astronomy were studied, and standard time was kept for the kingdom of Magadha, by means of the state water-clock.

Not all the sculptural developments of Ajanta are Kanishkan. The facade of Cave Nineteen, of some centuries later, shows in a wonderful manner the richness and variety of the elements to which the Mahayana had opened the door. Buddha is there treated not simply as the Guru whose every trace and footstep is sacred, but as a great historic character, to be portrayed in many ways and from many different points of view. He is being crowned. He carries the flag of Dharma. There is a freem in his attitudes and in the arrangement of the adoring figures by whom he is surrounded. At the same time, the recurrence of the chequer-pattern, instead of the Ashokan rail, now forgotten, shows the influence of Gandhara. And so the substitution of grinning faces for lotuses in the horse-shoe ornaments shows the overwhelming of the old purely Indian impulse by foreign influences. And so does the peculiar coat worn by the Buddhas. This garment appears to me rather Chinese or Tartar than West Asian. But it must be said that it is not purely Indian. What is the date of Cave Nineteen? Kanishka was A.D. 520. It is customary to assume that Nineteen is that Gandhakuti or image-house referred to in the inscription on Seventeen. Critics profess to find an affinity of style which groups them together. For my own part I must frankly say that to me this affinity is lacking. I believe the Gandhakuti to mean the image-shrine at the back of at the back of Seventeen itself. A pious founder might well count this and the cave and the cistern three separate works. This inference is confirmed by a reference I find in Hiouen Tsang to a Gandhakuti or hall of perfumes, i.e., doubtless, of incense within a Vihara in the kingdom of Takka. I can not imagine that Nineteen was made y the same hands or at the same time as Seventeen. I think it is considerably later and less conservative, and exclusively Indian. At the same time I think it must be the "great Vihara" of Hiouen Tsang, which he describes as about 100 feet high, while in the midst is a stone figure of Buddha about 70 feet high, and above this a stone canopy of seven stages, towering upwards apparently without any support. Making allowance for faulty translation in regards to terms, which by those who have seen the caves are used with technical regidity, this may offer a fair description of the cave as it would appear to one who saw it in the plenitude of its use and beauty. If this cave were, as I think, excavated about the year A. D. 600, then when the Chinses traveller visited the abbey in the middle of the century it would be the central place of worship and one of the main features of interest at Ajanta. But there is at least one other synchronism of the greatest significance to be observed in reference to Cave Nineteen. This is the affinity of the treatment of Buddha in its sculptures to those of Borobuddor in Java. It is as if the style were only making its first appearance. There is the same idea of costume, and the standing Buddhas have something like the same grace of attitude and gentleness of demeanour, but the process of idealising has not yet been carried to its highest pitch in this kind. There is in the carried to its highest pitch in kind. There is in the Javanesse Buddhas, as revealed in Mr. Havell's photographs of them, an the real remoteness with which these do not quite compete. Yet here is the promise of it. And the great bas-relief on the Stupa in the interior has the same look, is of the same quality. The expedition that colonised Java is said to have left Gujarat in Western Indian early in the seventh century, and this was evidently the conception of fine art that they carried away with them.

In this visit of Hiouen Tsang to the abbey, we have a hint of the marvellous cosmopolitanism which probably characterised its life. It is another way of saying the same thing, that is said with almost equal distinctness, by the Chitya-facade itself. Chinese, Gndharan, Persian, and Ceylonese elements mingle with touches from every part of India itself in teh complexity of this superb edifice. The jewel-like decorations of the columns without remind us of Magadha. The magnificent pillars inside carry the mind to Elephanta and its probably Rajput dynasty. The very ornate carvings of the triforium and the pillar-brackets, were originally plastered and coloured. The Stupa also once blazed with chunam and pigments. The interior must have been in accord, therefore, with the taste of an age that was by no means severe. The Vakataka house must have ruled over an empire in Middle Indian in which civilisation had reached a very high level. It must have been the centre of free and healthy communications with foreign powers. And above all, the old international life of learning must have had full scope in the abbey's hospitality. Buddha and the Bodhisattvas were only the outstanding figures in the divine world which included a constantly-growing number of factors. The little choultry outside is purely Hinduistic in its sculpure, as if to say that the order looked with no unfriendly eye on the less organised religious ideas and affections of the pilgrim householder. A mythological system which is practically identical in Japan, China, and India sheltered itself behind the Mahayana. All the sacred and learned literature of India was by it pur in a position of supremacy. Hiouen Tsang was as careful to pass on to his disciples the comments of Panini on Sanskrit grammar as more strictly theological lore. He was as eager for the explanation of Yoga-the secular science of that age-as for the clearing up of points about relics and shrines. India, in fact, as soon as the Mahayana was formulated, entered on a position of undisputed pre-eminence as the leader and head of the intellectual life of Asia.