The Cities of Buddhism - 4 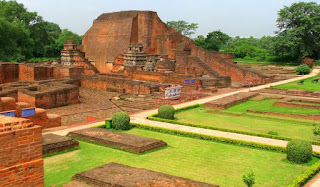 Undoubtedly a fashion once started in such strength under Buddha-worshipping sovereigns and commonwealths would tend to be imitated in later ages when the system of ideas that we know as Hinduism had come more definitely into vogue. It is also possible that when the Buddhistic orders failed or died out, their places were somtimes taken, in the ancient Maths and foundations, by Jain religious. Something of this sort appears at least to have happened at Sarnath and possibly at Khandagiri also. But the whole history of the relations between Brahmins, Buddhists, and Jains wants working out from an Asiatic and not European point of view, if many pages of history are to become clear to us.

One question of great interest that arises in this connection, is What of this parallelism in the case of Pataliputra? Going back to Rajgir, we see the early ancestral capital of the Nanda kings confronted, at least in later ages, by Nalanda, the historic university of Bengal, to which Hiouen Tsang owed so much. But what of Pataliputra itself? Can we suppose that the imperial seat had no official Ashrama of piety and learning in its vicinity? Yet if it had, and if perhaps the "Five Pahars" mark the site of this religious college, what was the situation of the capital in regard to it?

Again we find place and occasion, by means of this generalisation, for more definite consideration than was hitherto possible of India culture and civilisation at various epochs. What were the various functions performed by these great extra-civic priories? No Englishman haas reason to be prouder of Oxford than the Hindu of Ajanta. The eternal antithesis of Europe between "town and gown" was never a source of rioting and disorder in the East, only because from the beginning they were recognised by universal consent as distinct entities, whose separateness of interests demanded a certain geographical distance. What was the life lived in these royal abbeys, whose foundations date back in so many cases-notably Bodh-Gaya, Sarnath. Dhauli, and Sanchi-even earlier than the reign of Ashoka himself? They were a symbol, to the eyes of the whole community, of decocracy, of the right of every man to the highest spiritual career. It is not conceivable that they should have been entirely without influence on the education of youth. But undoubtedly their main value intellectually lay in their character of what we would now call post-graduate universities.