The Ancient Abbey Of Ajanta - 2 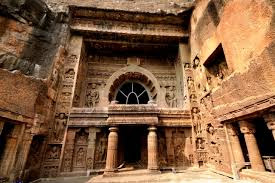 Sixteen and Seventeen have inscriptions which, it is said, render them the heart of the matter; for they were built during or soon after the lifetime of the great Gupta, Maharaja Deva (Chandragupta 2, Vikramaditya, A.D. 375 to 413), by a sovereign who had married his daughter. And Caves Five to One were probably undertaken immediately after.

In any case, it is the first group, Caves Eight to Thirteen, that for hundreds of years formed the whole glory of Ajanta. Eight and Thirteen may probably have been natural caverns occupied tentatively long before the time of Ashoka by a handful of monks. Those were days in which kings rich cities, and great landowners could scarcely perform a work of greater merit than hewing out caves for the residence of monks. In course of time, therefore, thes natural recesses in the rock (which we imagine to have been the motive and starting-point) were transformed into simple monasteries by first enlarging the centre and then cutting tiny cells each with its two stone beds and low doorway, round the space, which thus acted as quadrangle or courtyard. Number Thirteen has, in addition to these, a small earthen verandah in front. Number Eight has not even this. It seems probable that the occupation began from two points more or less simultaneously, and afterwards worked inwards, for how else are we to explain the fact that Nine and Ten, standing side by side, are both Chaityas?

We imagine too that the first settlement was early, when faith was strong, and the living impress of the Great Teacher was yet fresh. For how else can we account for the strength that clung to the bare rocks by the torrent-side with such pertinacity, decade after decade? Were they some band of wandering teachers, we wonder, those first monks, appointed to preach in the countries on the Southern Road, a mission sent to the powerful empire of Ujjain, or an offshoot perhaps from the mother-communities at Bhilsa and Sanchi? In any case, the caves were valuable to them as headquarters during the wet season, when all begging friars are supposed to assemble for the time in some fixed dwelling-place; and during their absence as a body, for eight or nine months at a time, the work of excavation must have gone forward. Little did they dream of how well-starred were both the spot they had chosen and the day of their advent! WE can see, what they could not, close on twelve hundred years of development and gathering fame, the learning they were to send out; the beauty they were to build up; the kings who would delight to honour them; and roads from the far ends of the earth, all meeting on their threshold. Hiouen Tsang came here, in the middle of the seventh century after Christ, and speaks of the place as "a Sangharama constructed in a dark valley. Its lofty halls and deep side-aisles stretch through the face of the rocks. Storey above storey, they are backed by the crag and face the valley". It is evident here that the English translator-not having in his own mind the thing his author was describing-has rendered the text inaccurately. If we read, "it lofty Chaityas and deep Viharas at their sides", the statement immediately becomes luminous. Similarly, when later we are told that the great Vihara is about 100 feet high, and the stone figure of Buddha in the middle 70 feet high, while above is aa conopy of seven stages, towering upwards, apparently without support, it is evident that the great Chinese  traveller is speaking of no Vihara, but of the principal Chaitya of his own day(Nineteen or Twenty-Six?), and that the stone figure he describes is really the Dagoba it contains.

The first royal patronage extended to Ajanta must have been given at or soon after the time of Ashoka, when the Chaitya known as Cave Nine and the Vihara numbered Twelve were built. Every one who takes up the study of ancient sites in India finds his own indications of age. At Sanchi the gradual modifications in the pictorial treatment of the Ashokan rail give us a chronological scale which enables us to distinguish with absolute certainty no less than four different periods of building and sculpture. Here at Ajanta the time -unit that serves us from the first is the Chaitya-facade ornament taken in conjunction with the Ashokan rail. It would appear that the domestic architecture of the age was characterised by the rounded roof which we still see in the rocky caves of Ajanta; by the Ashokan rail, used as the front of a verandah; and by the horse-shoe window, breaking the line of the roof, or mansard. Now the instinct of cave makers was to make their fronts as closely as possible resemble the outsides of the buildings of their period.