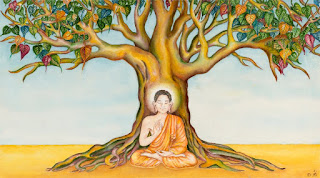 Nor need we think that the city thus built was only a palace and its appurtenances. The fact that it actually became the new centre of population, forming the direct ancestor of the present village, shows itself two hundred years later, when the great Ashoka, desiring to build fitting memorials to Him whom the emperor delighted to honour, chose its north-western corner, on the left hand of the main gateway, whereat to place a stupa and Ashokan pillar with an inscription. AS the edicts carved by Ashoka on rocks and pillars have the character of proclamations, it follows that the rocks and pillars themselves partake somewhat of the nature of the modern journal, inasmuch as they were the means adopted to publish the royal will, and hence a position could never be selected for them at a distance from inhabited cities. The inscribed pillar at Sarnath was placed at the door or in the courtyard of a monastery. And similarly the inscribed pillars, whose fragments have been found at Pataliputra, were erected in the interior or on the site of the old jail as an act of imperial penance.

We may take it, then, that old Rajgir was really deserted at about the time of Bimbisara's successor, and if it was afterwards used as a royal residence, was so used at intervals, as Amber is now. Such then was the city, already ancient, through which Buddha Himself has passed time and again, and were He was held by all as an honourable guest. Across these fields and up and down these streets, now ruined, or within the massive cathedral-cave of Satapanni, there echo to this hour the immortal reverberations of the voice of Buddha.

Why did He come this was at all? Was it for the sake of the learned men who forgather in the neighbourhood of capitals? Was the famous University of Nalanda of after-ages, already, perhaps, a university, where one might come in the sure hope of finding all the wisdom of the age? It would seem as if, any way, He passed this spot with treasure already in the heart, needing only long years of brooding thought to fuse His whole Self in its realisation. Unless He was sure of the truth before He reached here, He could not have gone, sure and straight as an arrow from the bow , to the unfrequented forest of Bel-trees, with its cave overhanging the river, and its great tree between the farms and ponds, where now the humble village of Bodh-gaya stands.