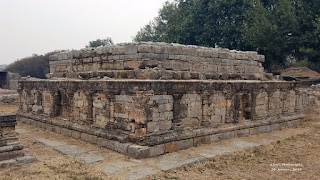 It is also easy to infer that the learning which could be acquired at Taxila was somewhat cosmopolitan in its character. The knowledge of herbs is a comparative science, and Taxila was on the high-road to Persepolis and Babylon, as well as to China and Nineveh. It was the doorway of India, or at least the university which had grown up beside that doorway; and that it was known as such among other nations is shown by the fact that Alexander came that way in 326 B.C. For the purchase of foreign stuffs, for knowledge of the geography that lay beyond her own border, for foreign news and foreign learning, possibly even for secular science as a whole, India had no centre like Taxila.

It follows with equal clearness that for the headquarters of a strictly national culture one would look nearer to the valley of the Ganges. Even the least organised of systems will somewhere have its central ganglion; and the fact that the Indian ganglion lay two centuries later in Magadha, is proved by the retirement of Chandra Gupta to Pataliputra after his defeat of the Greeks.

It was evidently not absurd with the means then at the disposal of the crown to look from that distance to mobilise armies on the frontier. But if military plans could be carried out so far from their base as this, then we cannot object that Magadha was too remote to be the religious centre of the whole. Benares and Baidyanath are still left at its two extremes to tell us of the spiritual energy of its great period. The miracle that puzzles the imagination of historians-the sudden inception in the sixth centruey B.C. of conscience in place of religions of power-is, rightly viewed, no miracle at all. These religions themselves were always there; it was only their organisation that began with the date named.

The events of history follow sequences as rigid as the laws of physics. Buddha was the first of the faith-organisers, and first in the India of nation-builders. But Buddha could not rise and do his work until the atmosphere about him had reached a certain saturation-point in respect to those ideas which the Upanishads preach. The founders of religons never create the ideas they enforce. With deep insight they measure their relative values, they enumerate and regiment them; and by the supreme appeal of their own personality they give them a force and vitality unsuspected. But the ideas themselves were already latent in the minds of their audience. Had it not been so, the preacher would have gone uncomprehanded. Through how many centuries had this process of democratising the culture of the Upanishads gone on? Only by flashes and side-gleams, as it were, can we gother even the faintest idea.

It is partly the good and partly the bad fortune of Buddhistic movements in India that, from their association with an overwhelming individualised religious idea, they appear to us as a sudden invention of the human mind in such and such a year. We do not sufficiently realise that they, together with all the words and symbols associated with them, must have been taken from a per-existent stock of customs and expressions already long familiar to the people amongst whom Buddhism grew up. We imagine the great Chandra Gupta to have been the first monarch in India of an organised empire, but the words of Buddha himself, "They build the Stupa over a Chakravarti Raja-a suzerain monarch-at a place where four roads meet", show that the people of that early period were familiar enough with the drama of the rise and fall of empires, and that the miracle of Chandra Gupta's retirement to Pataliputra, thence to rule as far as the Punjab and the Indian Ocean, was in fact no miracle at all, since the India of his time was long used to the centralised organisation of roads, daks, and supplies, and to the maintenance of order and discipline.