The Ancient Abbey Of Ajanta - 3 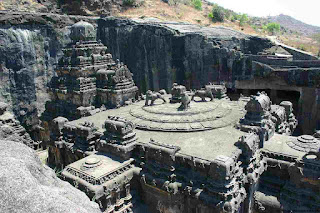 But a style creates a tradition, which persists long after the original reason for it has disappeared. Thus the horseshoe ornament and the Ashokan rail become a mannerism at Ajanta, diverging constantly further and further from their true intention; and by these progressive changes we can make a rough estimate of the ages of the caves. In Nine and Twelve they are used with obvious sincerity, reflecting the conceptions of their age, in the same way that the early printers of Europe laboured to make their machine-printed books look as if they had been written by hand. On Viharas Eight and Thirteen they do not occur at all. Evidently the founders were too early or too poor to indulge in such elaboration. Chaitya Number Ten had a timer front, which has fallen away and leaves no trace of its image or likeness, save in the panels sculptured in the rocks on either side. But these horse-shoe ornaments do not altogether cease till after Cave Nineteen. At first they are frankly windows in house fronts. over the cell-doors and run round the walls connecting one with another in simple dignity. In Caves Six, Seven and Fifteen we find the spaces filled with lotus patterns, and the semicircular opening no longer has a definite meaning. They are no longer windows. They are now only decorative. On the facade of Cave Nineteen foreign influences art at work. A horrible vulgarity has come over the workmen, strictly comparable to the degrading effect of European taste on Indian crafts today. Each of these once beautiful outlines is now filled with a hideous grinning face, altogether meaningless.. From the chequer-work which recurs here again and again (an ornament common amongst the Gandhara sculptures in the Calcutta collection), it is clear that these influences have come from the north-west. They are possibly Greek, as transmitted through Persia. There had been a great rapprochement between India and perisa in the course of the fifth century, and nowwhere is the crude secularising effect of the West on Indian taste better illustrated.

Yet nowwhere is the sober, synthetising power of the Indian intellect more visible. In spite of its eclecticism of detail, and daring romanticism in the treatment of sacred subjects, Nineteen at Ajanta remains one of the architectural triumphs of the world. It is the very flowering-point of a great civic life. The strong porch, brought forward on two solid pillars, suggests the presence and words of the leaders of men; the side-galleries, their supporters and attendants; while on the sill of the great window behind we have room and background for the anointing of a king or the lying -in-state of the dead.

We are accustomed to think of the hotels de ville of Belgium as the crown of the world's communal architecture. But Belgium has nothing, for simple unity and mastery, to compare with this. It dominates a small court, from which a false step would precipitate one down a steep Khud. Obviously the style was not invented for such a position. Here, as at a thousand other points, Ajanta merely reflects the life of India during one of the greatest periods of her history. Cave Nineteen remains, carved in imperishable rock, when all the buildings of its day have disappeared, a memorial of the splendour and restraint of Indian cities during the ages of the Gupta rule.