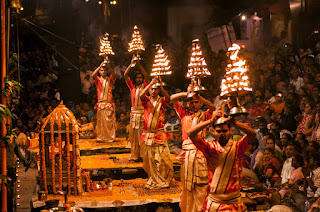 The peculiar significance of Bihar in the comity of the Indian peoples rises out of its position on the frontier-line between two opposing spiritual influences. To this day it is the meeting-place of Hinduistic and Mussalman civilisation. Sikh and Arya Samaji and Hindusthani Rajput pour down the waterway of the Ganges, to go no farther east than the twin-cities of Patna and Bankipore, and these stand face to face with the unified and Sanskritic civilisation of Lower Bengal. All sorts of modified institutions, representing mutual assimilation, arise along the borderline. Costume, language, manners, and habits of life are all full of this compromise. The old standard of culture, which even yet is not wholly dead, along a line stretching from Patna through Benares to Lucknow, required of the highest classes of Hindus the study of Persian as well as Sanskrit, and one of the most liberal and courtly types of gentlehood that the world has seen was moulded thus.

The fertile country of Bengal, closely settled and cultivated, organised round the monarchyo f Gour, and claiming a definite relation to Benares and Kanauj as the sources of its culture, cannot, at any time within the historical period, have been susceptible of chaotic invasion or colonisation. The drift of unorganised races could never pass through Bihar, which must always have been and remains to the present the most cosmopolitan province of India. It has doubtless been this close contiguity of highly diversified elements within her boundaries that has so often made Bihar the birth-place of towering political geniuses. The great Chandra Gupta, his grandson Ashoka, the whole of the Gupta dynasty, Sher Shah, and finally Guru Govind Singh, are more than a fair share of the critical personalities of Indian history for one comparatively small district to have produced. Each of the great Biharis has been an organiser. Not one has been a blind force, or the tool of others. Each has consciously surveyed and comprehended contemporary conditions, and known how to unify them in himself, and to give them a final irresistible impulsion in a true direction.