The Ancient Abbey Of Ajanta - 6 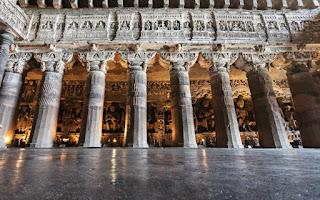 We forget that every age seems modern to itself, and that warm throbbing human life once filled these empty cells, that human love and conviction inspired every line and curve of their contour, and that human thought beat ceaselessly to and fro against their walls and screens, in its search to determine for man the grounds of eternal certainty. But even when we have answered these questions we have yet to answer one other, as pressing ,as important. How did all this activity come to an end? The history of the death of Buddhism in India has yet to be entered upon, in the true spirit of critical enquiry, but when it is undertaken, what vast areas will be found elucidated!

Here, in the neighbourhood of Ajanta, are many features of interest and possible significance. The railway is still forty miles away, and has not yet had time to derange the commercial relations of the grand old market town called Neri, encircled by its battlemented walls. Some eight miles to the north of the caves lies the postal town of Vakod. Is there any connection here with the word Vakataka? Four miles to the south on one side, and again four to the morth on the other, are the towns of Ajanta and Fardapur. Both are seats of Mogul fortification testifying to the strong and independent character of the country from early times. At Ajanta there is a palace and a bridge of some ten arches, with an enclosed pool, below which lie the seven cascades that lead to the monastic ravine.

In the grim old village of Fardapur these is another fort of Aurungzeb, which is now in use as a caravanserai. The whole aspect of the place is ancient and fortress-like, and the mode of building which obtains these throws a sudden light on what must have been the aspect of Rajgir, when Buddha entered it, in the days of Bimbisara five and six centuries before Christ. Every wall has a basis of pebbles and mortar; and upon this are reared blocks of baked earth, shaped like masses of masonry. They are broad at the base, considerably narrower at the top, and the slope from one to the other is slightly concave. Even the delicate brick battlements of the Moguls are built upon an older foundation of rubble wall. A similar mode of shaping earth obtains even so far east, it is said, as teh western districts of Bengal. Undoubtedly it is a method of unkonwn antiquity. The curving slant gives to every cottage the air of a fortification, which indeed it is, and from a mediaeval point of view a fortification of very admirable materials.

Even had the old walls of the fort not been visible under the Mogul battlements, we should have known that the place represented an ancient camp of the people, rather than the mere stronghold of an army of occupation. This is shown, in the first place, by its size. It is, in fact, a walled court or compound, containing a spring of water and a place of worship. Around it are quarters for hundreds of people, and at the gateways and corner-towers residences for officers. A whole population could take refuge here with their women and their cows, against the onset of an army, or the invasion of a tribe. The fact that it could have been worth while for a powerful government like that of Delhi to occupy so large a work at the close of the Deccan wars, in what seems to us now an obscure village, is a wonderful testimony to the strength and hostility which were the expression of thousands years of organised independence.