What were the houses like that looked down upon these footways? What was the life that was lived in them? How long had the place been a city? How long did it continue to be one? What were the surroundings in the height of its glory of this abode of kings, now a austere and desolate ruin? These and a thousand other questions crowd upon us, and it is strange to how many of them we can give an answer. The rushing rains of Indian summers have long washed away most of the soil from the hanging gardens that once clothed the hillsides, and made the prospect from the palace to the gates and beyond them through the pass leading out into the plains a veritable vision of delight.

But still the artificial terraces of red trap-rock are smooth and level amidst out-cropping masses of natural crags, and still the wanderer may take his stand on some spot whence Bimbisara the king was wont to look upon the glories of his inheritance, or, with difficulty at one or two points, may trace the way through the old pleasure by which doubtless royal hunting-parties may have started for the forest-glades. Today, it is true, there are no rich woodlands covering slopes and mountain-tops, as in the royal ages. Wild undergrowth, dense shrubs, and here and there a twisted palm growing in a cranny are all that can stand for the lofty timbers, dense aisle of the days when the place was a paradise, a king's garden surrounding a king's palace. And still at the back of the ruined city, guarding it from the passes on the south and east, we find the double walls of enormous thickness. 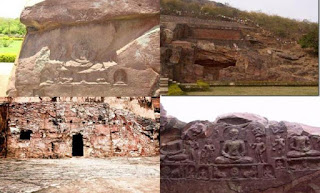 wed, give us a clue that enables us to rebuild, mentally, the ancient city. For these mortice-holes held the attachments of the wooden ornaments that formed the front of the cave. Now, between Bombay and Poona, on the west of India, is another cave, that of Karle, which though of a much later date must be of the same style and period as this, and there the wooden front is still intact. Moreover, the carvings from a picture, as Fergusson has pointed out, of an ancient street, from which we gather that the second storeys of houses standing in rows were decorated in front with crowded wooden verandahs, porches, niches, and all sorts of beautiful and irregular curved corners. That These, further, were not mere devices of beauty in the case of the houses, as they were in those of the caves, we see in the pictures which were carved, probably in the first or second century A.D. on the gateways of Sanchi. From these we can gather an idea of what the palace of Bimbisara and the homes of his subjects must have been like. The first storey, then, was massive, slopping inwards and upwards, loopholed and buttressed at its four corners by four circular towers. The first storey only was built of stone, and its parapet was battlemented. On the strong terrace provided by the roof of this fortification were constructed the family living rooms, which were of wood and much carved. That it would have been possilbe, however, to withdraw the women into the lower storey in time of war may be seen from buried ruins at Ujjain, which are shown by the Pandas as part of Vikramaditya's palace, and appear to have belonged to a fortess of Ashoka's time. Here, built of hard grey stone, now black with age, we have what seems to be the inside corner, and part of the courtyard, of just such a building as the Sanchi sculptures would lead us to expect as the dwelling of a king or noble. Outside, the walls would be almost blind; inside, they are honeycombed with many-pillared halls and verandahs, and one room with raised floor that represents an old Indian form of bedchamber and bed in one. In times of peace these were, we may suppose, the quarters assigned to men-at-arms. The building is of a massiveness that rivals nature, and there are a few pillars still left-almost the many that the succeeding sovereigns decorated in different degrees and different styles- whose simplicity of form enables any observer that knows Sanchi to feel fairly confident in assigning the building as a whole to the reign of Ashoka, or earlier.