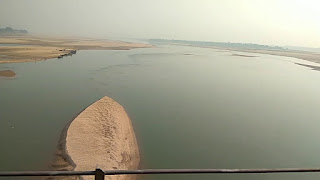 From Patna on the east to Benares on the west, stretch in the month of January fields of white poppies all abloom. In this Holy Land of the Buddhist nations blossoms today this flower of death. The earth where it grows was made sacred long ago by the feet of Buddha. At the site of the ancient Pataliputra, almost where Bankipore stands today, He entered the kingdom of Magadha. For ages they called the river-crossing Gautama's Ferry, and told how on his the river-crossing Gautama's Ferry, and told how on his last journey north He stood and watched the building of this first of its fotifications, foretelling the future greatness of the capital. In remote villages one constantly comes upon images of Buddha, worshiped inside or outside the temples of Brahman priests. In any field the peasant ploughing may turn up a relic or a fragment of carved stone. And under trees and bushes along the high-road one motes the three little heaps of mud standing side by side, that indicate a shrine of Jagannath the Lord of the Universe, name and symbol of Buddha himself. They have forgotten Him maybe, yet remember His memory, these simple worshipers of the Bihari villages. To far distant lands, and to scriptures written in a long-forgotten tongue, the modern organisation of scholarship has to go, to bring back to them the knowledge of Him whom under obscure names they worship to this day, in the very countryside where He lived and taught. A vague tradition of Infinite Mercy is all that remains amongst the unlearned of that wondrous personality. But this, after two thousand years, they cherish still. He belongs in a special degree to this peasantry of Magadha. There runs in their veins the blood peasantry of Magadha. There runs in their veins the blood of those whom He patted on the head as children. He taught them the dignity of man. He called upon them, as upon the proudest of his peers, to renounce and find peace in the annihilation of Self. To Gautama Buddha the peasant of Bihar owes his place in Hinduism. By Him he was nationalilsed.

Even in those stories of Buddha which remain to us it is explicitly stated that He sought amongst all existing solutions for the truth. This is the meaning of his traveling with the five ascetics and torturing the body with fasts. The first effort of a new thinker must always be to recapitulate existing systems and sound them to their depths. The Prince Gautama in the year 590 B.C., in the populous districts of the Sakya kingdom, awakening suddenly to the sense of his own infinite compassion, and to the career of a world-thinker, feels an overpowering need to meet with the scholars of his age, and makes his way, therefore, towards the neighbourhood of Rajgir in the kingdom of Magadha. From purely geographical considerations, we can see that there was doubtless another culture-centre, even so early as the age in question, at Taxila, in the extreme north-west. Indeed, towards the end of the life of Buddha himself, we are told of a lad who went there from Magadha-as European students of the Middle Ages to Cordova-to study medicine.