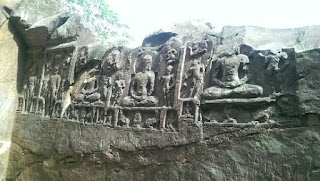 A world of discoveries awaits here! The path leads us across to the water, but this is easily forded by stepping - stones which may still be detected to form fragments of an ancient bathing-ghat. Evidently bathing and bathing-ghat were as prominent in the Indian civilisation twenty-five centuries ago as they are today. Then the road follows the stream-side at a distance of this mountain is pierced by a great cave, supposed by some, with, as it appears to myself, overwhelming probability to have been the Satapanni Cave outside of which the First Buddhist Council was convened, in the year following the Mahanirvana or death of Buddha. The place today is known to the peasants of the countryside as the Sone Bhandar or Golden Treasury, which may or may not be simply a modern pronunciation of the ancient name. The interior of this cave is polished., not carved, There stands in it, as if some party of robbers had been interrupted in an attempt to carry it away, the earliest Stupa I have ever seen. The outside is half concealed by shrubs and creepers. But even now the mortise-holes remain that show where the carved wooden ornaments were once attached. And even now, as we stand at the entrance, we see in the distance, in the middle of the city, the tower that Fa Hian noted as still intact and visible in the year 404 A.D. , crowing a small stupa or well to the east of the palace.

This cave then was the cathedral of old Rajgir. Here Buddha must have rested or meditated or taught; and there must, suggested some member of our pray, have been a roadway connecting it directly with the palace. Acting on this clue, we proceeded to brush aside the wild growths and explore the line between the two. Outside the cave we found a level floor of ancient asphalt, a sort of Venetian Plaza de San Marco as it were. This was evidently the town square, and we picture here the scene of the First Council, 543 B. C. It was more we read a reference in one of the old Chinese Suttas of a certain place in Rajgir-as the place where the peacocks were fed."The place where the peacocks were fed"; how our minds had lingered over the words when we first read them! And now here we stand. For undoubtedly just as the pigeons are fed outside St. Paul's, so on this asphalt plaza, before the cathedral entrance in an Eastern city, it fitted the royal dignity and bounty that peacocks should be daily given grain.

The asphalt runs down to the river and across it. For the water still flows under the ancient bridge, and we can walk on it through its level is somewhat sunken. Easily, then, we make our way to the royal mansion, clearly marked as this is at its four corners by the foundations of four bastion towers. But turning again to the bridge, we find an unbroken line of this same asphalt running along the bank by the way we have come, though sooth to say we might never have noticed it if we had not been tracing it out from the conspicuous mass.

Was this, the river-front opposite to the palace, protected by the steep hills behind, and running from the town plaza to the bathing-ghat beyond, and across this to the city gates-was this the High Street of the ancient town? Every now and again, as day after day we pace brooding up and down the distance, every now and again we come upon some hitherto unnoticed mass of masonry or mason's tool-marks. Here are a couple of blocks lying on their sides, as if to form a seat in a river-wall. Here again traces of steps or fallen ornaments. At one place on the opposite bank, deeply sunk between masses of earth and vegetation, there runs down to the riverside a small ravine that would now pass as a gully if the pavement or ancient asphalt did not prove it-in days before Pompeii and Herculaneum were born - to have been a street.