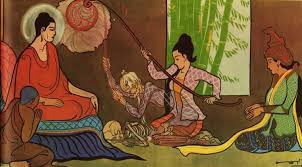 Of such a form, then, though perhaps smaller and less elaborate, may we suppose the palace of Rajgir to have been, and in the streets about it the more plebeian dwellings of the townsfolk must, though small and comparatively huddled, have like unto it. True, their lower storeys would be built, in all probability, even as the huts of the Rajgir pilgrims are to this day, of mud and pebbles, instead of lordly stone. From hillocks formed of earth of such, anyone may by the stremside, pick out at various different levels, bits of old household pottery. But the facings and tops of these shops and houses were doubtless of carved wood, and the front of the cathedral was a faithful enough reflex of the life of the town. Through such streets, while the king stood watching him from the roof of the palace, paced the Shakya Prince, "a lad in his first youth," ere yet he was Buddha, and no honour that Bimbisara could offer would tempt him from that bridal of Poverty in which alone his mind delighted. "This life of the household is pain, free only is he who lives in the open air"; thinking thus he embraced the life of the wandering monk.

Far away from Rajgir, in the north of Rajputana we have Amber and Jaipur, a couple of cities which every visitor to India tries to see. Of these, Amber is situated in the highlands, and Jaipur out in the open plain, and Amber is very much the older of the two.  It is in fact an old Indian doctrine that no city should occupy the same ground for more that a thousand years. It is supposed that a potent means of avoiding pestilence and other ills is then to move out and occupy a new space. In accordance with this canon the new city of Jaipur was laid out. And when all was finished, the Maharaja moved into the new town, with all his people.

Now this history of Amber and Jaipur, enacted in modern India, and still fresh in the memory of the Rajput people , is our guide to much in the history of Old Rajgir. For in the lifetime of Buddha, the son of Bimbisara-that tragic king, Ajatashatru, across whose path falls the red shadow of a father's murder! - found that the time had come to move the city of kings, and he accordingly built a new city with walls and gates like the last, but out in the open plain. And there the grass-covered ruin lies to this day, the west of the present village, the grave of a city, the memorial of New Rajgir.

Bimbisara was the king of Magadha in the days of the Great Renunciation. Ajatashatru was king at the death of Budhdha. But we know, from the fact of the desertion of their highland stronghold and its rebuilding outside, that for five hundred years at least before their time there had been a city on the site of Old Rajgir.