The Cities of Buddhism - 2 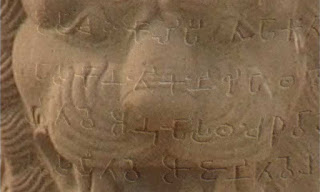 Let us suppose, however, that two thousand and more years have rolled away, and that we are back once more in that era which Dhauli was a fortified capital city. The elephant-heralded decree stands outside the gates, proclaiming in freshly-cut letters of the common tongue the name of that wise and just Emperor who binds himself and his people by a single body of law.

"I, King Piyadassi, in the twelfth year after my anointing, have obtained true enlightenment," the august edict begins. It goes on to express the royal distress at the imperialistic conquest of the province, in Ashoka's youth, and assures his people of his desire to mitigate this fundamental injustice of his rule by a readiness to give audience to any one of them, high or low, at any hour of the day or night. In further enumerates certain of the departments of public works which have been established by the new government, such as those of wells, roads, trees, and medicine. And it notes the appointment of public censors, or guardians of morality.

In his reference to the obtaining of "true enlightenment" Ashoka records himself a non-monstic disciple of the great monastic order of the day. Nearly three hundred years have elapsed since the passing of the Blessed One, and in the history of the Begging Friars whom He inaugurated there has been heretofore no event like this, of the receiving of the imperial penitent into the lay-ranks served by them. Their task of nation-making is slowly but surely going forward nevertheless. In the light of the Gospel of Nirvana the Aryan Faith is steadily defining and consolidating itself. The Vedic gods have dropped out of common reference. The religious ideas of the Upanishads are being democratised by the very labours of the Begging Friars in spreading those of Buddha, and are coming to regarded popularly as a recognised body of doctrine characteristic of the Aryan folk. Vague racial superstitions about snakes and trees and sacred springs are tending more and more to be intellectually organised and regimented round the central figure of Brahma, the creator and ordainer of Brahmanic thinkers.

Thus the higher philosophical conceptions of the higher race are being asserted as the outstanding peaks and summits of the Hinduistic faith, and the current notions of the populace are finding their place gradually in the body of that faith, coming by degrees into organic continuity with the lofty abstractions of the Upanishads. In other words, the making of Hinduism has begun.

The whole is fermented and energised by the memory of the Great Life, ended only three centruies agone, of which the yellow-clad brethren are earnest and token. Had Buddha founded a chruch, recognising social rites, receiving the new-born, solemnising marriage, and giving benediction to the passing soul, his personal teachings would have formed to this hour a distinguishable half-antagonistic strain in the organ-music of Hinduism. But he founded only an order. And its only function was to preach the Gospel and give individual souls the message of Nirvana. For marriage and blessing, men must go to the Brahmins: the sons of Buddha could not be maintainers of the social polity, since in his eyes it had been the social nexus itself which had constituted that World, that Maya, from which it was the mission of the Truth to set men free.