The Cities of Buddhism - 1 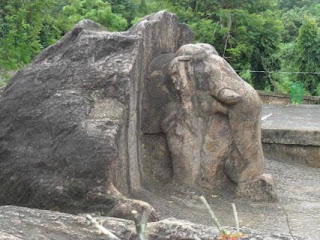 Accepting the theory that Buddhism was developed in India, not as a sect or church, but only as a religious order, founded by one of the greatest of the World-Gurus, we find ourselves compelled to account for the relations that would arise between the king or the populace, impressed by the memory of Buddha, and the order that followed in his succession and bore his name.

To do this, however, it is first necessary that we should have some determinate idea as to where, in the India of the Buddhist period, were the great centres of population. An Indian city, it has been well said, is a perishable thing, and it is easy to think of names which would justify the statement. No one who has seen the Dhauli Rock, for instance, seven miles away from Bhubaneshwar, can imagine that the edict it bears, fronted by the royal cognisance of the elephant head, was originally sculptured in the wild woods where it now stands. A glance is enough to tell us that the circular ditch which surrounds the fields below was once the moat of a city, backed and fortified by the Dhauli Hill itself, and that the edict-bearing rock stood at the southeastern corner of this city, where the high-road from the coast must have reached and entered the gates. This city of Dhauli was the capital, doubtless, of Kalinga, when Ashoka, in his military youth, conquered the province. In order to estimate its value and importance in the age to which it belonged, we must first restore to the mind's eye the ports of Tamralipti and Puri, deciding which of these two was the Liverpool of the Ashokan era. A theocratic institution such as pilgrimage is frequently a sort of precipitate from an old political condition, and almost always embodies elements of one sort or another which have grown up in a preceding age. Presumably, therefore, Puri was the great maritime centre of the pre-Christian centuries in Northern India; and if so, a road must have passed from it, through Dhauli, to Pataliputra in the north. By this road went and came the foreign trade between India and the East, and between the north and south. In the age of the Keshari kings of Orissa, not only had Dhauli itself given place to Bhubneshwar, but Puri perhaps b the same process, had been superseded by Tamralipti, the present Tamluk. It was at the second of these that Fa Hian in the fifth century embarked on his return voyage. Such a supersession of one port by another, however, would only be completed very gradually, and for it to happen at all, we should imagine that there must have been a road from one to the other along the coast. If only the covering sands could now be excavated along that line, there is no saying what discoveries might be made of buried temples and transitional cities. For a whole millennium in history would thus be brought to light.

On the great road from Dhauli to the north, again, there must have been some point at which a route branched off for Banaras, passing through Gaya and crossing the Punpun River, following in great part the same line by which Sher Shah's dak went later and the railway goes today.