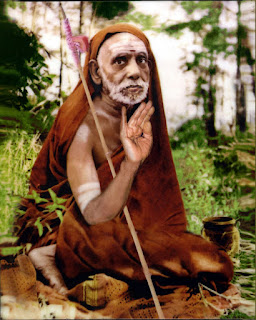 On this happy occasion when our country Bharat has attained Independence, the people of this ancient country must pray whole heartedly and with one mind to Sri Bhagavan. Let us all pray to God to vouch safe to us strength of mind and energy to engage ourselves more and more in attaining spiritual knowledge. It is only by the grace of Almighty that we can safeguard the freedom that we have achieved and also help all the living beings on earth to lead a happy life.

It is worthy to note that luckily the Chakra of Bhagavan, who is the embodiment of Dharma, has its place in the centre of our National Flag. This Chakra reminds us of the moral values enjoined by Emperor Ashoka, who is historically famous as Devanampriyaha. Further, the Chakra makes us contemplate on the spiritual discipline imparted by Bhagavan Krishna in the Bhagavad Gita. That Dharma which shines in the form of a Chakra is clear from Lord Krishna's reference to the Chakra as "Evam pravartitam chakram" in Verse 16 of the III chapter of the Bhagavad Gita. Also in Verses 14 and 15 of the same chapter Bhagavan avers that " The human body originates from food, food grains grow because of rains, rain showers because of performance of Yajnas(Vedic Sacrifices), these Yajnas are prescribed in the Veda and that the Veda has emanated from Brahman who is in the form of Akshara(Sound recorded as letter of the alphabet)". Thus, the Dharma Chakra explains to us that the supreme Brahman is manifest in Vedic sacrifices. May this Independence, dawning with the rightful remembrance of Emperor Ashoka, grant us such fruits as Aram(Dharma or Righteousness) Porul(Wealth), Inbam(Happiness) and Veedu(Moksha – deliverance), by the grace of God.

There are three stripes in our National Flag. They are of dark green, white and orange colours. These colours seem to indicate to us, that military strength for protection from enemies and evil, wealth for welfare and prosperity, and knowledge for the sake of proper administration are essential for the nation. It may be remembered that dark green is the colour of Durga – the Parasakti who is the mother protector, Mahalakshmi, the goddess of wealth and prosperity is of orange colour(golden hue) and Saraswathi the source divine of all knowledge is white in colour. It is a happy coincidence that the colour of the three Shakthis(Goddesses of Power) are seen in the three stripes of the National Flag.

For long, the Indian Nation has strived hard for winning freedom. By the grace of God, by the blessings of great men, and by the unique sacrifice of the people, independence has been won. Let us all pray to the Omnipresent God to shower his grace so that with the hard won freedom, our country becomes prosperous, is rid of famine, and there are no social skirmishes and the entire nation lives in an atmosphere of amity and kindness.

Now that freedom has been attained by the nation, all of us must also try to develop Independence. If we understand ourselves fully we may consider ourselves as independent. We are not capable of controlling the senses. We are unable to suppress desire and control anger, which always troubles us. Whichever thing in whatever measure we obtain does not lead us to contentment. Worldly sufferings cause worry to us. The mind gets confused on noticing these sufferings. What is the way out of all these? we must try to control, albeit gradually the mind which has been functioning vigorously for such a long time. Once the mind is set at rest, we will not be in need of anything. That state of mind which ensures complete freedom is what we must attempt to achieve.

Every day atleast some time should be set apart for practising the control of mind and bereft of other thoughts, we must meditate upon God. Then gradually, the mind will become calm, whereupon we will have the mental power to subjugate desire and anger. Spiritual knowledge will accrue fast for him who practises such meditation. Only these who attain such true spiritual knowledge can truly be independent citizens.

Any woman other than one's wife must be respected as one's own mother. We must regard other living beings as we would regard ourselves. Even at the risk of death, truth alone must be spoken. Petty social feuds must be averted totally, Every one must strive for improving his knowledge and his spiritual attainments and move with others in an atmosphere of kindness. We must sincerely wish that all people should live happily and peacefully.