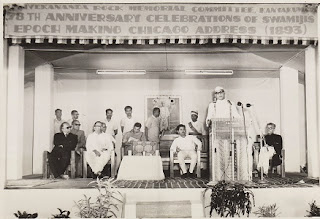 Eknath Ranade was a Karmayogi, wedded to work, dedicated to Nishkama Karma, Self-less Seva, of which he was an embodiment and his life a shining, inspiring example. There is no doubt, he will live in and through the dedicated work done by the Vivekananda Kendra through its life-workers at its many branches, in different States, including Port Blair in Andamans, where they are running a school with over 300 students, Imphal in Manipur, Gauhati and Dibrugarh, Tinsukhia in Assam, in so many places in Arunachal Pradesh where they are working among the Tribals, the most neglected children of Bharatmata, running among them for their children, both girls and boys, with the devoted love and labour of their lady-life-workers over a dozen schools, including Residential and Girls Schools, with the co-operation and appreciation of both the people and the Government. The people have been inviting them cordially to open more and more schools in their areas for the benefit of their children and the people in the area, for the teachers, in these schools, some of them as far away and inaccessible as in Tafragaon, are dedicated and devoted souls; who even during vacations do not go on a holiday to their own home but hold camps and like to meet parents and other people, young and old, in different areas to work among them to serve them. They seek to understand them, learn about their manners and customs, their language and culture, to appreciate them and to build bonds with them for their national integration as an invaluable element in the beautiful, multifaced, rich and varied culture of India, which accepts, assimilates and enriches and inspires and unifies us all, and which is like a garland of many flowers, or like a symphony of many tones and tunes, woven into a beautiful inspiring harmony, precious for all.