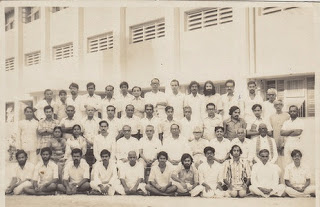 It has been singing through the centuries, for ages untold, the rich resonant song, the ineffable music of ‘Unity in diversity.’ which is the need not only of India that is Bharat, but of the whole world, entire Humanity, which without its message of love and wisdom, of Harmony and Unity, would fall a prey to venomous, warring creeds. It would fall a victim to hatred and disharmony and to destruction, devastation and death, through the multiplica­tion of monstrous means of mass destruction devised by modern science, with its enormous efficiency, in its unparalleled unwisdom and exceptional technical competence, misdirected to inhuman ends which may result in diabolic deeds, which would be a shame to civilization and a blot on culture and humanity.

Swami Vivekananda’s message proclaimed at the World Congress of Religions at Chicago on 11th Sept. 1893, was therefore the message of Universal Brotherhood, of fraternity and friendship between the nations and among their people, the world over. This message is not only very relevant but even indispensable today to prevent a human holocaust. And Vivekananda Rock Memorial, erected opposite the ancient Kanyakumari temple at the land’s end of the Indian sub-continent, where, in Gandhi’s words, the three seas meet to wash the feet of Bharatmata, is a national monument in the true sense of the term, for it has been built at a cost of 1.25 crores by collecting small donations of one or two rupees each from lakhs of common people and not only from the rich or the Government. Making it national in this sense too, was to the credit of Eknath Ranade, who had so planned it and pursued this plan with vigour and skill. Karmayogi as he was he used often to quote from the Gita his favourite words “Yoga is skill in action.” Built as a memorial to one of the greatest sons of India and a prophet of Universal Brotherhood and World Harmony, the Vivekananda Rock Memorial is like a lighthouse shining in the dark, beckoning to India and the world to follow the path of harmony of religions, of faiths, of races, of creeds and castes. It sends out a message of world unity, of understanding and appreciation, of co-existence and co-operation, and calls for “selfless service of God’s creation as true worship of the Lord.”