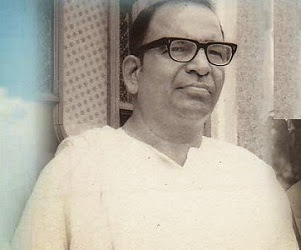 Eknath Ranade, the chosen instrument for the spread of the vital, vigorous, man-making, nation-building and world-unifying message, was not only the patient builder of the Vivekananda Rock Memorial which took 6 years to build (1964-1970) being inaugurated on 11th Sept. 1970, and which was a sturdy, impressive, magnificent monument in granite, to the memory of that magnificent personality Swami Vivekananda, but Eknath Ranade was also the wise visionary, the founder of the Vivekananda Kendra, a Service. Mission of active, dedicated men and women, who were to be the living growing memorial to the message of the matter Swami Vivekananda who had said in his wonderful inspiring prophetic words: "A hundred thousand men and women, fired with the zeal of holiness, fortified with eternal faith in the Lord and nerved to lion's courage by their sympathy for the poor and the fallen and the downtrodden, will go over the length and breadth of the land, preaching the gospel of salvation, the gospel of help, the gospel of social raising-up and the gospel of equality." These were the words which were the refrain of the one song which in the course of my 11-year-long, continuous, personal association with Eknathji since 1971, I was privileged to hear again and again and he lived and died to translate this dream of Swami Vivekananda into a living reality, an actual fact, through Vivekananda Kendra, the life-workers whom he taught and trained, among whom he lived and worked and died.