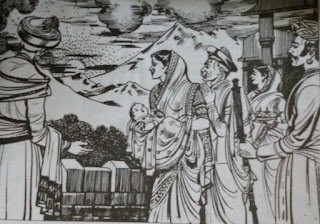 Shivaji's cradle swung on. While rocking him, Jijau kept dreaming of his future riding, his crossing the boundaries. Ddreams are nurtured through upbrining. And upbringing starts with lullabies. Raje was growing in the cradle. The nursery room was dark. Jijau performed religious rites and bringing up rituals with great devotion. Bhonsale's family priest Malharbhat Arvikar was on the fort. So everything proceeded as required. Event the administrator did not let anything lack.

Shivajiraje still had not come out in sunlight from the dark room. First outing in sunlight is delightful ritual. The family priest chose an early morning time for this auspicious ceremony. That morning having bathed, anointed with black dot to ward of evil, dressed in brand new baby clothes, Shivajiraje was ready in Jijau's arms for a glimpse of the Sun. Carrying him, Jijau stepped from the dark room into sunlight. This was Raje's first foray across a boundary. From darkness to light. Sun rose in the east. Fort Shivneri was swathed in gorgeous gold. Holding the infant prince in sunlight, she showed him the Sun God. Shivaji watched the Sun.

Shivaji raje was three months old at this time. All religious and traditional rites were carried out in time, with care. However the greatest teacher was the mighty Sahyadri. Raje was not yet old enough to understand these teachings, every gust of wind blowing in from the vales of Sahyadri wispered radical ideas to Shivaji, to fight for freedom. Bhimashankar, Lenyadri, Jivdhan, Amaba-Abmbika peaks of encircled Shivneri. Shivneri was sitting in the locks of Bhimashankar and on the lips of Name ghats. Around the fort, Meena, Pushpawati, Kukdi Rivers gurgled. Lords Ganesha, Shiva, Kalbhairav, Goddes Ambika guarded Shivneri. On the fort itself, in the dark cave, shimmering in gentle lamplight was Goddess Shivai.