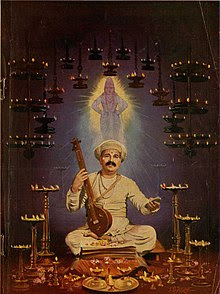 Tuka Pleads Oh God How! Can you sleep? Rise Now!

Shivaji became very fond of Sahyadri. He roamed deep forests, mountains and valleys. He checked out defence and attack positions. He was surrounded by bosom buddies just like the surrounding mountain peaks. His strength increased. Intellect sharpened. Confidence grew.

Around this time the Maval land resonated with something more than the brooks and landslides of Sahyadri! Sait Tukaram's delightful abhangs. He explained the meaning of the real dharma obscured by slavery and ignorance. He lashed out at false religious diktats. He used simple, sweet and precise words to elucidate the Vedas. He would playfully tick off pundits who memorised mantras like parrots and negotiated while often acting against dharma, saying, "Only we know the meaning of the Vedas. Others just carry burdens no heads!"

People gathered. Heard abhangs and discourses. Somewhere in their  minds slowly awareness was dawning. Let the head crack; let the boday break, the chanting will not cease! Such devotion spread. A tradesman in a land of devotion waas describing the fruits of determination power. While parising God Vitthal, and good Dharma sometimes he protested about the evil deeds of the ruling Sultan directly to God Vitthal. He would complain, "Sits, on throne, tortures people, Tuka asks Oh God! Are you asleep, come running to rescue!" This cry was not just to awaken the God in the temple; it was also to awaken the souls of citizens. Saint Ramdas advocated Ram worship and Rudra worship. Community worship flourished. Tukaram and Ramdas both had 'Ram' in them. Many saints cultivated minds of people to inculcate good behaviour, noble thoughts and devotion. Samarth (Ramdas) promoted hard work. He said, "Work is God. Light is fire, it will flare. Everything is possible, first do it!"