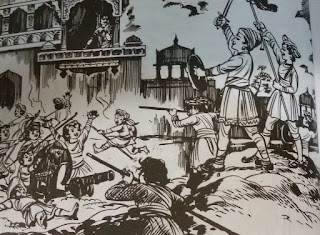 Mock kingdom and mock joy! Do these foretell Swarajya's Victories?

Shivaji was everybody's favriout as he was such a delightful baby. He would crawl about and his anklets would ring sweetly. He was playful and happy. He was healthy and fair. Slowly he started walking. And began running to chase his own shadow. On an auspicious day, Jijau introduced him to food. He took his first food intake from jijau's hands. Despite feeding on scrumptious fare, he was not fulfilled. He sneaked out taste mud.

Slowly Raje started growing up. Started playing with companions. He loved playing with earth. He would plaster his body with mud. He loved Mother earth right from childhood. He played hide-and-seek with his playmates on the fort. Ball and top were his favourite games. He got engrossed playing blind man's-buff. The palace reverberated with his shouts and laughter.

The Raje started enjoying battle games. he would pile up earth and call it a fort. Then the blockade of the fort would begin. Mock army would attack;siege and defence would begin. The skies boomed with war cries. Raje was engrossed in games of kingdom and kingdom of make-belive. He struggled to defend his mock forts. He would win new forts and hoist flags on them. These children's troops found the fort inadequate for their games.

Jijau watched these war games. Was she envisioning the attainment of these playoffs? Would today's butterflies turn into eagles tomorrow and conquer the skies?

At that time Shahhajiraje was vanquishing battlefields. For one Sultan or another. Marathi people defended Sultan's territories, expanded them, but why didnot they become sovereign kings themselves? Jijau could not solve this puzzle. Her eyes looked to Shivaji with hope.