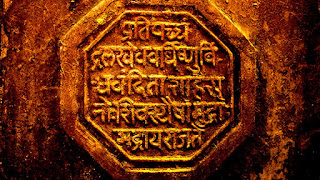 King Shivaji's seal was prepared. Stamps readies. Decrees with this seal and stamp were sent from Pune's Lalmahal. The inscription was in Sanskrit. It had letters:

"Pratipachhandralekheva Vaardhishnuvishwawandita, Shahsunoh Shivsyaisha Mudra Bhadraya Rajate" - The seal of Shahaji's son Shivaji glows for people's benifit. Like the new moon, this seal, and consequently the power of this seal will go on increasing. And like the new moon is worshipped by people, similarly this seal too will be accepted by people."

The stamp too was modest. It had a saying, "Humility becomes." Here is a letter in Modi script in Marathi language issued with this seal and stamp. Here Shivaji commanded some officer in Indrapur sector to properly continue the income of one Sambhaji Bhonsale. He was trained in running of the kingdom right from a young age. This order is dated: 1 Sawwal Suhur Year 1047. (30th oct 1646)

The royal letters shone with Shiva's majestic seal. After a deep dark night of over three and a half centuries, a new moon finally rose in Maharstra. This seal had the pride of freedom. The ambition of victorious acquisitions. There was confidence, of the evil-slaying Goddess Bhavani. This royal seal pleasantly smiling conferred courage to kith and kin and promised security. The leonine seal with flaming eyes breathed fire and roared warnings to enemies.

Raje always revered Sanskrit language right from the beginning. In fact later he kept learned Sanskrit pundits in his durbar. Amongst these were great poet Paramananda, Keshav Purohit, Dhundiraj Vyas, Umaji Pundit. Sanskrit language is Bharat's integrity. And worshipping integrity was Shivaji's and his reign's mission.