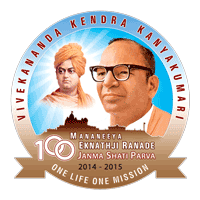 Mananeeya Eknathji further tells that the Prarthana has a great potential in keeping us always on the Dhyeyamarganuyatra. Renunciation - Tyaga - is important and it has so many dimensions. Few aspects of it are :

As per Bhagavad Gita, Tyaga is Sarva karma phalatyagam prahustyagam vichakshana: (18.2) or as given in the 9th shloka of same chapter Satvika Tyaga is doing one's ordained work by giving up attachment to action and claim to the fruit. In the organization any activity that we undertake, the main important work through it is building up of an ever-growing team for carrying forward the work. Main problem in creating a team is egoism, exclusive claim to success or attachment to specific work. If Tyaga is there in life, then  we can evolve as a team wherever we work.
Once we work as a team then the second difficulty of discouragement and loss of self-confidence will not affect individual worker. Because one individual worker may not be able to do one specific work, may not be good in some skills, but some one else of his team members good in that will compensate it. Thus whole team will mean combining of the best of all, and once Oneness with the team is felt, the achievements of the team are shared achievements. This shared pride will not have a place for inferiority complex.

Again Tyaga here is not sacrifice in its normally understood meaning. It is actually the smaller price we pay for a much bigger return. As sadhakas, we only give up small things of life to become eligible for much bigger things. As the story goes when some one praised a saint as having sacrificed  all worldly pleasures, the saint replied, "I have sacrificed small things for a much bigger thing, namely realization of Ishvara. But you have made a much greater sacrifice than me by giving up the bigger thing - Ishvara realization - for the sake of smaller things of the world." So Tyaga, which involves giving up worldly enjoyment in whole or in part, is not sacrifice, but the price we pay for much bigger result, return; a smaller pleasure given up for eternal joy and happiness. Here Tyaga means giving up or renouncing for something better, not sacrificing. Sacrifice involves giving up without any expectation in return.