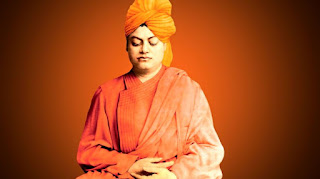 Sisters and brothers of America'. These were the opening words of Swami Vivekananda as he addressed the opening session of the Parliament of Religions in Chicago. His speech was greeted with almost deafening applause from the 7000-strong audience. He thanked Parliament as the "Mother of a Religion" which has taught the world both tolerance and universal acceptance (Vasudhaiva Kutumbakam). The profound concept of Advaita and Universal religion was presented to the West with the message -- "As the different streams, having their sources in different places, all mingle their water in the sea".

Swamiji had criticised those who believed that man was a sinner and he had proclaimed repeatedly the need for realisation of being and divinity that were already inherent in man. In his paper on Hinduism he had forcefully stated: "Yes, the Hindu refuses to call you sinners. Ye are the children of God, the sharers of immortal bliss, holy and perfect beings. Ye divinities on earth-sinners? It is a sin to call a man so; it is a standing libel on human nature." Vivekananda believed that "Blood and sword are not for the Hindu whose religion is based on the law of love. Man is to become divine by realising the divine ... Man is not travelling from error to truth but from lower truth to higher truth. Some of the very greatest of them (Rishis) were women".

In a talk on "Religion not the crying need of India", he told the audience, "Brethren of America the crying need of the East is not religion. We have more than enough religion; what they want is bread, but they are given stone. It is an insult to a suffering man dying of hunger to preach to him metaphysics ... send missionaries to them to teach them metaphysical nonsense."

At the plenary session, Swamiji was most eloquent when he said: "I came here to seek aid for my impoverished people, and I fully realised how difficult it was to get help for heathens from Christians in a Christian land. If anybody dreams of the exclusive survival of his own religion and the destruction of the others, I pity him from the bottom of my heart and point out to him that upon the banner of every religion will soon be written in spite of resistance 'Help and not Fight. Assimilation and not Destruction. Harmony and peace and not Dissension"!

His presentation at the Parliament of Religions is of paramount significance in his plans for the regeneration of India. And the message is relevant to this day. He called for the setting up of centres of spirituality for moral, economic and social uplift of the people. Today this is the crying need for the self-seeking political leaders as well as the intelligentsia and the common people to reform themselves in serving the country selflessly, and also to rise and live up to the ideal of bahujan sukhay bahugana hitaya.

The task of the leader is to work for the welfare of the poor, the Daridra Narayan and to harmonise religion and practical spirituality without fanaticism, selfishness, persecution, untouchability and corruption and to propagate honesty and integrity. India would become a much improved nation. He propagated 'work as worship'. He wrote to Swami Akhandananda from America 'work, work, work -- I care for nothing else, work, work, work, even unto death. Those who are weak must make themselves great workers, great heroes. Every action that helps a being manifest its divine nature is good, and every action that retards is evil. To Rakhal (Swami Brahmananda) he wrote. 'Far greater help must be given to the poor and downtrodden, the ignorant, let them be your God, Man is God, he is Narayana. Vivekananda was pragmatic and advocated that we have to bring technology from the West while they would learn spirituality from India.

Swamiji was most emphatic on the emancipation and education of women. He epitomized the Holy Mother Sarada Devi as the divine ideal of modern Indian womanhood as Shakti and Saraswati. It was with her blessings and inspiration that he finally decided to embark on his mission to the West. Swamiji forcefully said that only if Indian women are educated and treated with respect and reverence, India could move ahead. Deeply significant and particularly relevant are Swamiji's words of prophetic wisdom as manifest in his speeches at the Parliament of Religions and in his plan for campaigning in the midst of the quagmire of Indian society and polity. Significant too is his clarion call to "Arise, Awake and Stop Not Till the Goal is reached". We the people of India have to respond to this call.

With considerable regret, Swami Vivekananda had once remarked that 'Sometimes I feel a desire to sell the (Belur) Math and everything and distribute the money to the poor during the plague epidemic in Calcutta'. He told his disciple that "your duty is to save the poor and miserable, without distinction of caste and colour and you have no need to think about the results. Who serves Jiva serves God indeed." He thus conveyed Sri Ramakrishna's message -- Shiva jnane Jiva seva (Serve all beings knowing them as Shiva).

Swamiji had told his disciple that true spirituality meant a feeling of misery and restlessness till no man or animal, remains hungry for a meal. Abiding by the teachings of Sri Ramakrishna he coined the motto of the Ramakrishna Mission as Aatmano Mokshartam Jagadhitaya cha (Strive for one's spiritual liberation and do good to the world). Our leaders and our people have to live up to this ideal.