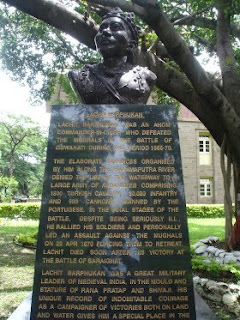 The Hindu Civilsation has given birth to many sages and warriors over its long history to survive and this is a short story of one of its greatest sons mostly known only within Assam but unknown sadly among most Hindus themselves..

On 24 November each year Lachit Divas (Lachit Day) is celebrated statewide in Assam to commemorate the heroism of Lachit Borphukan and the victory of the Assamese army at the Battle of Saraighat.

The event which is regarded as the keynote defeat of Mughal armies and the beginning of the fall of the Mughal Empire was the victory of the greatest Assamese Hindu warrior, Lachit Borphukan, who defeated the Mughals in the historic battle of Saraighat in April 1672.

A desperate fight ensued in the jungles and the valleys where the people rallied by Lachit Borphukan and the Hindu monks of the land in a war of liberation.

From the capital city of Guwahti to the depths of the forests the Ahoms fought and held back the tide of invasion. The proud warriors of Central Asia, Mughal and Pathan alike were foiled by the valiant resistance of the Ahoms.

Apart from being the headquarters of the Mughal Governor in occupied Ahom territory, Guwahati had great strategic importance. The Brahmaputra river between Kamakhya and Saraighat is the narrowest at Guwahati and there are hills on both banks of the river in this area.

The Mughal garrison was driven out from this fort and their counterattacks defeated. The Mughal reserves came up to the north bank and prevented further Ahom advance but could not dislodge them from Bargoda. Lachit Borphukan now shifted his attention to Sukreswar hill on the south bank where the Mughals had a fort, which was also the headquarters of the Mughul Governor. Ahom commandos managed to infiltrate the fort and neutralised the cannons by pouring water through their mouths and over their stock of gunpowder.

This was followed by a heavy cannonade by the Ahoms and a determined assault of the fort. Sayed Firoz Khan, the governor, was taken a prisoner. The Mughals abandoned Guwahati. Lachit Barphukan now advanced down the Brahmaputra to Manas recovering all the Ahom territory ceded to Mir Jumla. A stone victory pillar in the Guwahati museum has an inscription in Sanskrit praising Lachit Barphukan for his great victory against the Mughals.

An incident in the history of the Hindu Ahom resistance marks the spirit which animated their fight for freedom, when Lachit Borphukan, the Army General of Ahom king Chakradhwaj Singha had beheaded his maternal uncle for dereliction of duty while preparing to face the Mughals. His execution of his own uncle for not showing sufficient dedication to the war effort was not just an act of impulse but a reminder to his soldiers that in the service of one's Dharma.