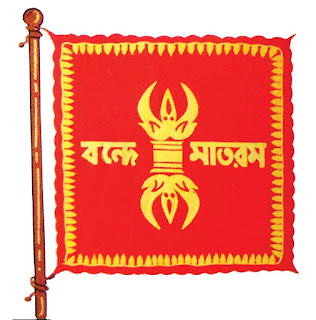 The first design of Indian Flag was pictured by Sister Nivedita was recently exhibited at the residential of Indian Scientists Acharya Jagadish Chandra Basu. The design which was designed in 1904 has been safely restored for years, said the officials. The flag was designed in a square shape on a red piece of cloth with an image of Vajra in yellow, stood vertically at the centre of the flag. Additionally, Vande Mataram has written across the centre of the flag, in Bengali. This design was fist showcased in 1906 at a workshop of the Indian National Congress in Kolkata.

Let not forget that at the heart of the circle lies the sacred object. Already  there are rising amongst us, hereafter to be multiplied in number and deepened in significance, hose other processions, symbolic of the idea of city and nationality. Already it is no uncommon thing to see the streets and lanes of a Hindu town filled with its singing boys who, carrying banners and instruments, are chanting prayers to no god or godess, but intoning the sacred address to the Motherland. Let us all remember as we watch them, that the city about which they march is the symbol of the nationality, that in her is the throne of the Mother Herself. The future will see more and more of these hymns and poems of place. It was a Mohommedan who composed that Ascription to the Ganges that every Hindu child in Bengal learns in babyhood. In doing so, he was the forerunner of a new ear in literature. Even now we are only on the threshold of that great age. But many who are young to-day will not have grown old before these things shall come to pass. To Indian hearts, Hindu and Mohommedan alike, his caste and lowly-born, woman and man, there will be no symbol so holy as, firstly, their mother land, and secondly, their city. The civic life will offer a conception as clear as that of family and home. The duties of citizenship will seem not less precious than those of jati and samaj. And the worship of place and sense of civic honour, dignity, and happiness will bear their flowers in each individual soul. (-Sister Nivedita : Civic and National Ideals)

http://www.sisternivedita.org
-- हमें कर्म की प्रतिष्ठा बढ़ानी होंगी। कर्म देवो भव: यह आज हमारा जीवन-सूत्र बनना चाहिए। - भगिनी निवेदिता {पथ और पाथेय : पृ. क्र.१९ } Sister Nivedita 150th Birth Anniversary : http://www.sisternivedita.org --- You received this message because you are subscribed to the Google Groups "Daily Katha" group. To unsubscribe from this group and stop receiving emails from it, send an email to daily-katha+unsubscribe@googlegroups.com. To post to this group, send email to daily-katha@googlegroups.com. Visit this group at https://groups.google.com/group/daily-katha. To view this discussion on the web, visit https://groups.google.com/d/msgid/daily-katha/5b58cd2f-4a79-1b02-3177-34e9f4ff82a0%40vkendra.org. For more options, visit https://groups.google.com/d/optout.
at 14:06